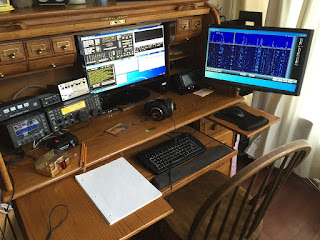 I always enjoy participating in this contest and in years gone past it allowed me add to my DXCC list. This year was a whole other story.......I was only able to contact and hear Canadian and U.S stations only. I came across a VE2 station calling CQ and he sounded like a distant DX station! I was not sure if it was just my station not hearing any Europe stations. I decided to listen in on a few of the big gun U.S station to see who they were contacting. The stations I choose to listen in on were contacting fellow U.S and Canadian stations only.  I made 10 or so contacts all on 20m and with 5 watts QRP.  My station setup was the Elecraft K3, MFJ 1788 loop antenna on the balcony, N1MM+ logging software and Win4K3 Suit rig control software. Also I use MRP40 CW decoding software for the "machine gun" code senders. I found in this contest the top end code speed was in around 35 wpm so no decoding software was needed. I have not been on the radio much as work has been very busy once again. It was nice to sit down and get on the rig again, I knew it had been a long time away from the radio when I wanted to spot a CW station and I had to actually look and look for the spot button on the rig!
Mike Weir, VE9KK, is a regular contributor to AmateurRadio.com and writes from New Brunswick, Canada. Contact him at [email protected].