My 'wow-meter' was recently pegged when learning the details of some noteworthy amateur radio activities. Two of these events described the astounding results of "floater balloon" activity.

One such device was launched in mid-July from Victoria state, Australia, by VK3YT, Andy Nguyen. His balloon was given the callsign of VK3YT-8, as it carried amateur radio tracking gear capable of transmitting its location and other data via APRS packets.

The small balloon travelled across the South Pacific and reached the coast of South America in less than a week! From what I can determine, it was last heard from on July 21st....29,000' above central Brazil and heading for the Atlantic Ocean at 69MPH where, I presume, balloon #8 met its demise. 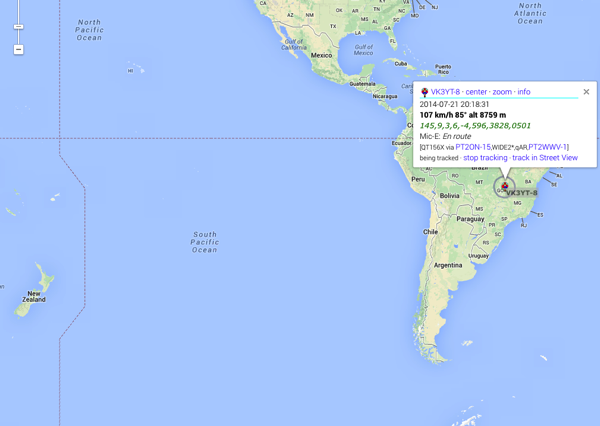 It looks like Andy has just launched VK3YT-12 whose predicted path may be viewed here.

Although Andy's systems are very sophisticated, they are based on small 'Party Foil' balloons carrying small antennas and around a 12 gram, 10mw electronic payload.


Tracking is via VHF APRS packet dumps (some even going via the ISS) and telemetry data via THOR16 or OLIVIA digital modes. Some use rechargeable batteries while others seem to be completely solar powered. Unfortunately I am dreadfully ignorant when it comes to APRS and many of the new digital modes. There is very little detailed information on Andy's onboard hardware, all of which seems to be homebrew.


Many of the balloons appear to float in wide circles a few hundred miles from their release points while others are immediately pushed northwards and out to sea....some quickly reaching New Zealand. Balloon #8 has been the biggest success to date.

You can follow VK3YT's pico progress from balloon #1 to the present, via the VK3YT Blog....what a wonderful example of amateur radio experimental fun!

On the other side of the world, another ardent pico-ballooner is Leo Bodnar, MØXER, who has been launching similar small balloons from near London.
Leo's first payload, B-1, was released in June, 2013 and reached an altitude of almost 36,000 before bursting and returning to earth where it was successfully recovered.

Ever since B-1, Leo's balloons have been going higher and further but what happened with B-64 must have even surprised him. 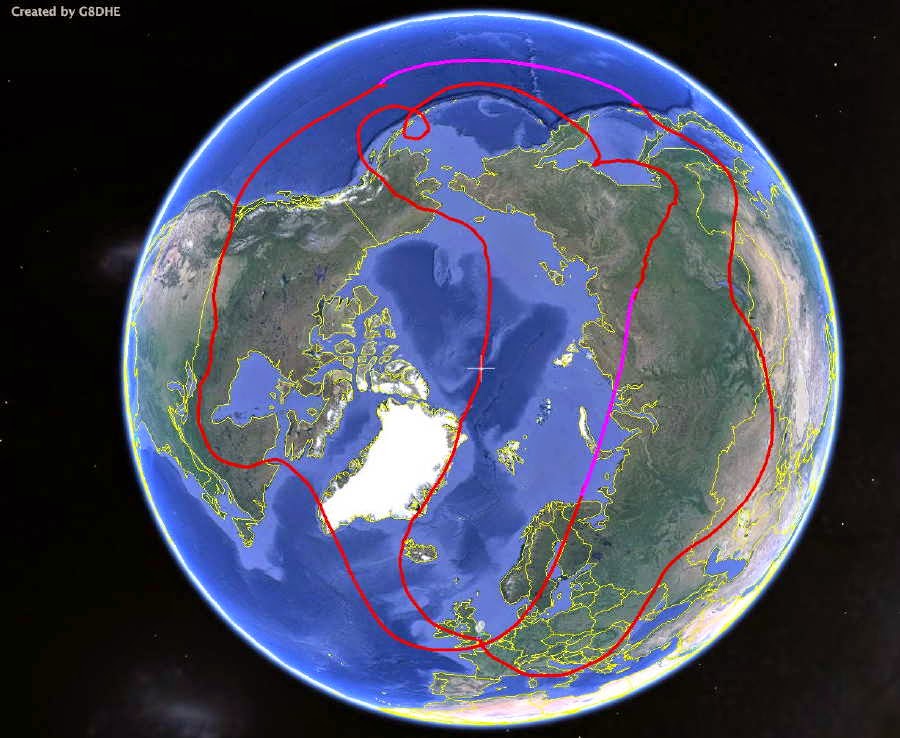 Launched July 12, 2013, the homemade plastic balloon took off like a rocket, circumnavigating the entire globe in 19 days and passing within 9km of the North Pole and almost overflying the launch site on it's second trip! A few minutes before today's posting, the balloon (at 40,000') has just overflown Murmansk and is now over the Barent Sea, heading northeast at 52MPH. Progress can be tracked from here. He has now had three balloons circumnavigate the globe, with the last two losing contact on their second round as they approached Japan.

Personally I find these results astounding and am so impressed with the sophisticated systems that these very knowledgeable amateurs have been able to pack into such a small payload.

One thing I am not totally clear about is the actual onboard hardware....is everything scratch-built or are they using readily available modules? I suspect the former in which case I would love to see details of the actual circuitry being employed. As well, there seems to be a variety of different telemetry systems being used with some preferring to store packets until within range of a suitable download link while others rely on amateurs around the world to track, record and decode the digital beacon information...all fascinating stuff.

Kudos to Leo and Andy and all of the others for such well-executed and interesting radio projects. There seems to be a growing worldwide interest in amateur radio balloon projects and a search of the web has provided enough bedtime-reading for weeks. One thing for certain is that all of these fellows are very...very...digital-savvy which likely lets me out of the picture.

Maybe there are some nice low-tech balloon ideas for folks like me, floating around out there!