Ever since my outing on to Ling Fell yesterday I have been bugged by not knowing for sure whether the problems I experienced with the VX-8GR were really caused by receiver overload or blocking. I like the construction and features of the Yaesu. But a radio that makes you miss some of the contacts you have laboriously sweated up a summit to make is about as much use as a chocolate teapot. I wondered if I could devise a test to give me an idea of the relative strengths of the different 2m radios. I did, and the candidates are lined up in order of merit below, the worst on the left and the best on the right. 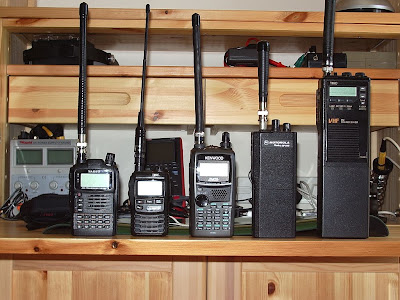 The test methodology was crude. I connected each radio to my dual band vertical and tuned in a weakish station: the GB3AS repeater on 145.600MHz, which is normally an S3 signal – fully readable but with some background noise on the audio. I then transmitted a carrier on 144.025MHz using another radio on a helical antenna a few metres from the vertical. I tried two power levels of the interfering signal, 3.5W (“high power”) and 0.5W (“low power”), these being the available power levels of the test radio. This 8dB difference in the interfering signal level had different effects on the ability to receive the repeater signal.

I am well aware of the limitations of the test I carried out. In real life SOTA or WOTA use a radio may be subjected to strong in-band signals from activators on other summits but they will not be as strong as the signal from a radio a few metres away from the antenna. A radio is likely to be subjected to strong signals from outside the amateur band such as pagers and other commercial signals, which the bandpass filters in modern radios due to the marketing-driven necessity of providing wideband receive coverage will do nothing to attenuate. Many strong signals may mix together to cause intermodulation effects if not blocking. However, a receiver that can handle a strong in-band interfering signal is likely also to be better at coping with many strong signals being received over a range of frequencies. So I think my test results have some validity.

Beginning with the worst receiver, the results are as follows.

Out of interest I also carried out the test on my FT-817ND and the Kenwood TM-D710 I use as my 2m base station. The FT-817ND was slightly better than the TH-D72: there was no effect with the low power carrier but the high power one brought a noticeable background hiss on the signal. The TM-D710 performed close to the TH-205E. There was barely any noticeable effect from the high power in-band carrier.

I think the results of these tests, crude though they are, are interesting. The bigger the radio, the more likely it is to have a receiver able to handle adjacent strong signals. Paying lots of money for the latest technology is no guarantee of getting a better receiver. In fact, just the opposite. An ex-commercial handheld or a ham band one from the days when wide band receive coverage was not considered important will work better than the latest marvels.

Were it not that I find the full APRS functionality of the VX-8GR and TH-D72 useful, I’d be tempted to sell both those radios and just use a dumb tracker plugged into the mic socket of one of the others tuned to 144.800. Either I use the VX-8GR for APRS only and carry another radio for making contacts or I must try harder to love the TH-D72. Decisions, decisions. But at least I now have a bit more information to base them on.