7 September 2015 | by Andrew MØNRD  |  Share |  Tweet |  Leave a Comment (0)
Already a week into September and not long now till the National Hamfest where I and the South Kesteven ARS are launching a high altitude balloon launch subject to CAA approval. The documents have been submitted so just waiting for the nod.

The balloon and parachute have been purchased from Steve Randall (G8KHW) at Random Engineering, using the same size as I did for the Eggsplorer-1

I had joked about sending some "Ham into space" on this flight but following the smelly end to Eggsplorer-1 have opted to play it safe and avoid food! Instead will be sending up a toy pig (well a small squeaky dog toy) 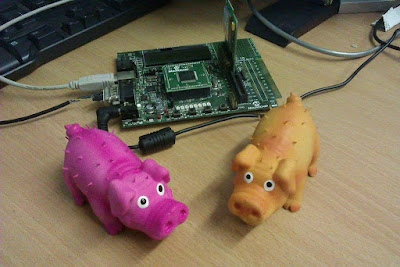 Similar to the Eggsplorer-1 the main tracker will be a Raspberry Pi fitted with a camera and two transmitters.

The tracker is based on the "Pi In The Sky" code base/design by Dave Akerman (M0RPI) and Anthony Stirk (M0UPU) with some modifications since I am building on simple strip board using a different GPS module/interface and omitting any power supply monitoring.

On the Eggsplorer I used an old Pi Model B but was forced to butcher it to reduce the power demand by desoldering the network/usb chip. This time I am using a Model A+ which is smaller/lighter and has a much reduced power demand and with the locking micro-SD card socket will hopefully prevent a repeat of Eggsplorer-1's failure mode.

PINKY & PERKY are progressing well, just waiting delivery of some strip board and they should be completed in the next day or so.

PINKY will be 300-Baud RTTY, sending telemetry along with SSDV image packets using the UKHAS format.

PERKY will be using one of the LoRa modules again sending telemetry and SSDV but with greater resolution and speed, but will require a LoRa receiver/gateway (see Dave Akerman's website).

While the SSDV is attractive to tracker enthusiasts the high speed RTTY is more difficult to receive, so I will be flying a secondary 'backup' tracker. The use of a backup proved invaluable on the Eggsplorer when the main tracker failed.

PIGLET will be a 50-baud RTTY transmission with telemetry and should prove easier to receive.

I finished PIGLET at the weekend 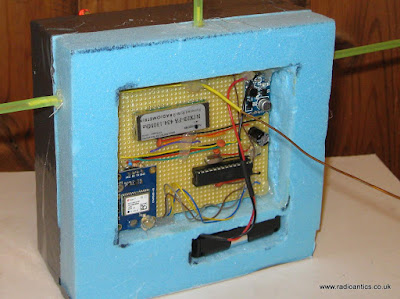 Again built on strip board it is based around the ATMEL ATMega128 micro-controller using the Arduino system with a number of off the shelf modules connected to it.

It has one of the GY-GPS6MV2 GPS modules I blogged about last year feeding into the UART. The NTX-2B transmitter (frequency agile version from Hab Supplies) and a I2C BMP180 pressure/sensor module (not visible as mounted to measure external conditions) It also has a small boost converter to supply 5V and extract all the available power it can from the 3-AA lithium battery pack.

One change compared to the EGG1 tracker is to use a PWM output from the Arduino to generate the RTTY tones rather than a register voltage divider (guide here) which seems to give a cleaner signal.

The antenna is simply copper wire making a 1/4 wave ground plane. The 'box' are some layers of styrofoam glued together with UHU-Por with duct tape, some straws and beads for safety. Just needs the batteries fitting and the lid fixing with more duct tape and PIGLET is ready to fly. 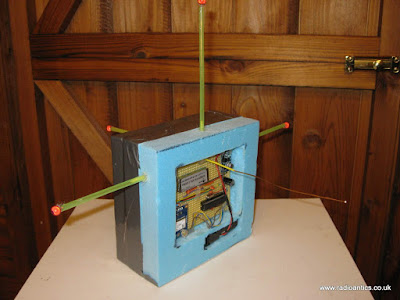 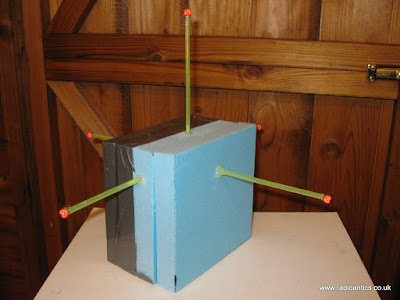 Full details of frequencies will be posted nearer the time.
Andrew Garratt, MØNRD, is a regular contributor to AmateurRadio.com and writes from East Midlands, England. Contact him at [email protected].