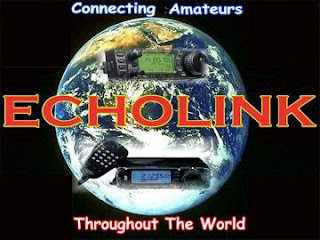 If you’re a regular reader of this blog you’ll probably have observed my comments about the lack of activity on VHF hereabouts. Even though I can raise three 2m repeaters there is next to no activity on any of them. And although there are several active amateurs in West Cumbria most are “over the hill” from me so I never hear them.

Some time ago I thought about setting up an EchoLink node to make it possible to have some contacts on VHF. But when I realized how much trouble I would have to go to in order to get permission for this I went off the idea pretty fast.

My interest in this basic idea was rekindled when I read recently about the D-Star Digital Voice Access Point. Personally I’m not going to be interested in D-Star until the prices of compatible radios come down and you can buy them from other manufacturers than Icom. Besides, I like my little TH-F7E with its wideband AM/FM/SSB/CW receiver and don’t want to change it for one that doesn’t have that facility. But why shouldn’t I set up a very low power EchoLink node for my personal use so I could make some contacts using my TH-F7E hand-held from round and about the house?

I put in an online application for a Notice of Variation (NoV) to my license to run an attended simplex node – which so far hasn’t made any progress. However, fellow blogger Tim G4VXE writing about his experience with the DVAP mentioned that he made some quick enquiries via the RSGB’s ETCC as to the legality of using the DVAP without an NoV and they were not concerned about DVAPs or hotspots as long as there is no third party traffic.

I presume that D-Star, being digital, knows who is calling in to the system so you can set it so only you have access. With EchoLink you can really only have security by obscurity, using low power, a poor antenna and an obscure frequency so that it won’t pick up transmissions from anyone else. I’m not sure if this meets the official standards for not allowing third party traffic, but my enquiry to the ETCC has also gone unanswered (so far.) I got fed up with waiting and decided to go ahead.

I first tried EchoLink many years ago when it first was announced. At the time I had no way to access the system except direct from my computer. After making a few contacts that way I found that talking to hams without using any radio wasn’t very interesting, so I didn’t use it again.

Even though I am only using RF to make the link of a few metres to the radio connected to the computer, because I am using an actual radio it really feels like I am making a radio contact. I have set up the G4ILO-L node so that it doesn’t allow connections from computer-connected users. There may be disadvantages to this and perhaps some will consider it a bit unsociable but I still feel that using amateur radio at each end of the link is an important distinction that differentiates EchoLink from internet chat. I can still join EchoLink conferences and conferences may include directly connected users so talking to people who aren’t using a radio isn’t completely ruled out.

I dare say there are some who will still consider that making contacts in this way isn’t amateur radio. But the fact that my RF is not going directly from my radio to his is of no great importance as far as I am concerned. This isn’t meant to be a way to explore propagation or work DX. It really isn’t much different from using a repeater.

If I find that it is worthwhile keeping my EchoLink node running then it will create a couple of new radio projects to work on. I will need to make a new computer/radio interface and either build or modify a radio that I can dedicate to the link so that the equipment I am currently using for it can be released for other uses.

Because I signed up for EchoLink soon after it was announced I have a coveted low node ID number: 3098. I have swapped this number over to use for the link. The G4ILO-L node is running low power to a leaky dummy load so it can only be used to contact me. If you have access to the EchoLink network by radio, please give me a call. It would be great to talk to you.