As some of you know, I’m a bit of a sucker for hand-held radios. Whilst browsing eBay I’d often come across the Intek H-520 Plus CB hand-held and thought what a nice looking rig it was and wouldn’t it be nice if it could be converted to amateur 10m usage. A couple of days ago I stumbled across a site that gave the details of how to convert it for amateur 10m use so I decided to order one. It arrived this morning.

Never has a radio been taken apart so soon after its arrival. (Real hams don’t care about warranties!) Unfortunately, no matter how hard I tried, I couldn’t find again the site that had the modification information, but I vaguely remembered the details. Beneath the battery compartment there is a loop of wire. Snip it and push the ends apart. I’m not sure what that does. Now put the batteries back in and turn on the radio whilst depressing the Menu button. You can then select the option “Po” by pressing the down arrow button. Press Menu again, then press and hold the up arrow button until the frequencies displayed are in the 29MHz region. You now have a 10m FM / AM hand held.

Whilst I was doing this I was WSPRing on 10m and I saw some very strong traces from stations in Germany indicating that there was short-skip Sporadic-E on 10m. Were conditions such that I would actually be able to make some contacts with the new radio today?

The antenna supplied with the Intek H-520 Plus is about 15cm long so I suspect it will be less than useless for making any DX contacts. Clearly what I need in order to use this as a portable radio is some kind of long BNC 10m antenna, but at the moment I don’t have one. The H-520 comes with a “car kit” which screws to the bottom of the radio and allows you to power it from an external supply and connect an antenna with a PL-259 plug. So I hooked it up to the shack supply and the attic dipole.

I tuned around and there seemed to be things going on, so I found a clear frequency, 29.520MHz, and called CQ. After a few seconds jack PE1JRP called CQ on the same frequency. I called him and we made contact. He found my signal was up and down, as I did his, but he gave me a 53 report. He said that Leo PA3ELQ was waiting on the frequency and he then called, for my second contact. My report in this case was 57. They were both pretty impressed with my signal running – as I thought – 4W output.

I decided to check the H-520 Plus on my power meter and found that, far from putting out the advertised 4 watts, it was only radiating a whisker over 2. I took it down to the CB channels and even there it was giving barely 3W output. I also recalled that the web page that I could no longer find mentioned the need to turn up the deviation for 10 FM use. 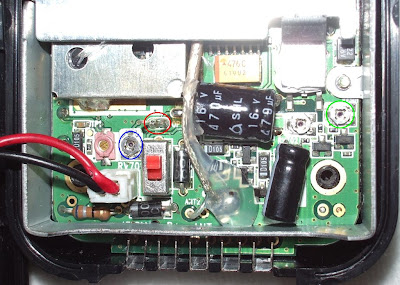 I managed to locate and download a service manual for the H-520 Pro and this gave a procedure for adjusting the power. I had to turn the power control pot all the way up and I still only got about 3.6W on battery power (and just about 4W when running from the car adapter.) That’s good enough, though. From the block diagram I also was able to identify the FM modulation pot and turned that up a bit, though neither of the Dutch stations had complained about my audio. In the picture above, the red circle shows the wire loop that you cut, the green circle shows the power out pot and the blue circle the modulation control.

With the radio back together I hooked it up to the dipole again and worked Oliver DH5PK, receiving a 53 report. I am quite happy with my three contacts considering that I only opened the box after lunch and the radio spent much of the time disassembled. I saw from VHFDX.info that there was a great opening on 6 metres at the same time, but making contacts with less than 4W of FM is more challenging.

What I’m hoping, of course, is that I can make some contacts like this using the H-520 Plus as a hand held radio with a whip antenna!