In all the years I have been a ham and home constructor one item of test equipment I have never possessed is a frequency counter. Whenever I have needed to test if something is oscillating I have just stuck a bit of wire in the antenna socket of a receiver and listened for it, and if I have needed to tune an oscillator on frequency I have just tuned it for zero beat using a receiver that has been adjusted as best I could using WWV or similar. 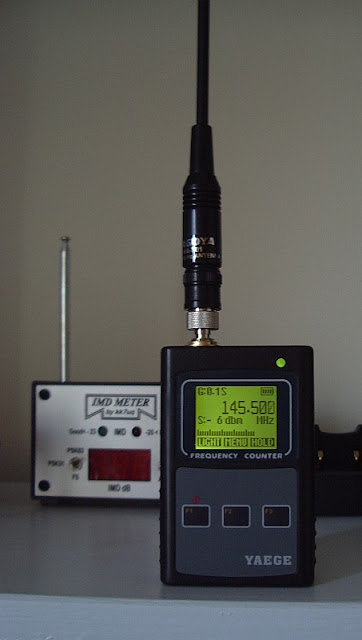 Recently I decided that it would be useful to actually have a frequency counter, preferably a really accurate one. I know that it is possible to buy secondhand lab grade frequency counters on eBay. The trouble is that when your shack / workshop is the size of a broom cupboard there is no room for boat anchors. I didn’t even have space for one of the inexpensive desktop frequency counters that are available. I decided that I would have to make do with a hand-held device. Farnell had one, but the price of £140 was rather too steep given the amount of use it was likely to get. I was about to give up when I came across the Yaege FC-1 being sold for about £30 on eBay.

My initial thought was that this was such a cheap device that it could not be very accurate and was probably not worth getting. The specification gives the time base accuracy as < 5ppm, which is worse than most ham radio transceivers. However, a bit of searching produced a PDF copy of the manual, which revealed that the TCXO module is user adjustable. I figured that I could get better than the quoted accuracy by regularly calibrating it using my rubidium frequency standard.

I ordered one from one of the Hong Kong traders and it came in just over a week. The antenna socket is a male SMA, similar to that used on the Chinese VHF/UHF hand-held radios and the opposite type to that commonly used by Japanese manufacturers. A short UHF rubber duck antenna is supplied with the counter. I ordered a BNC adapter so I could use my BNC whip antennas and also attach BNC terminated test cables.

I connected it up to my 10MHz rubidium frequency standard and found that it was already within a couple of Hz of the correct reading. The picture was taken before I set the gate time to 1 second which is necessary to get a reading down to 1Hz. 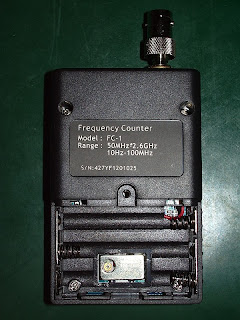 The time base oscillator adjustment is behind the battery compartment so you need to run the device from the charger while adjusting the frequency. You can see the adjuster in the picture on the right. Rather like adjusting the master oscillator in the Elecraft K2 the adjustment is incredibly touchy. The tiniest amount of movement can change the reading by a couple of Hz at 10MHz.

It turns out that it is not worth being so picky. The reading does slowly drift by a few Hz over a period of several minutes so you are never going to get absolute accuracy with a device like this. Nevertheless it is better than advertised and pretty good for the money, in my opinion.

One feature of the Yaege FC-1 that you don’t get with most frequency counters is a signal strength reading calibrated in dBm, as you can see in the top photo taken while I was transmitting a carrier on 145.500MHz. I wasn’t able to check how accurate the actual reading is but as a relative indicator the dB measurements seem quite accurate so this could be quite a useful tool for making antenna comparisons. It turns the frequency counter into a digital field strength meter.

Although it isn’t a lab grade high accuracy frequency counter I think the Yaege FC-1 is a useful addition to my electronic test equipment and is extremely good value for money.