My FoxTrak APRS tracker board is now installed in a plastic case, together with 4 x AA NiMH cells which provide near enough 5V to power both the tracker and the GPS. Two mini-DIN sockets on the side of the case allow connection to a PS/2 GPS or PC for configuration, and to the radio. Now I just have to make up interface cables to my radios and install the top half of the case after drilling it and installing the charger socket for the battery. 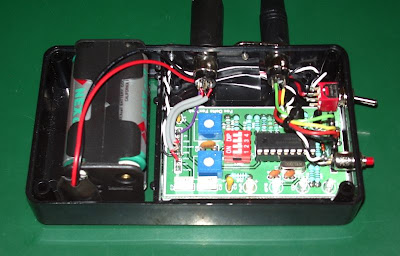 I purchased a GlobalSat BR-355 PS/2 GPS receiver on eBay and it works very well indeed with the FoxTrak, much better than the GPS in the Yaesu VX-8GR. It gets a fix within a couple of minutes when it is sitting on the shack window sill, unlike the VX-8GR which often never finds its position indoors at all, and the position remains rock steady unlike the Yaesu which tends to wander about.

I wanted to make a cable to use the tracker with my Motorola GP-300 hand-held. However I found that the jack plugs you can buy from component suppliers have too wide a body and can’t plug all the way in to the sockets on the top of the radio, which are a bit recessed. It appears that you need to use a proper moulded plug with the two pins. A cable for the Motorola GP-300 is available on eBay, so I’m waiting for one to arrive.

I was luckier with the old Kenwood TH-205E. The sockets for external mic, PTT and speaker are flush with the top of the case and the cable I made up using separate plugs works fine. Lacking a deviation meter I adjusted the audio output so the braaps sounded as loud as those from other APRS stations.

However, the TH-205E is a bit big and heavy for portable use, especially as it has a high capacity Ni-Cad battery pack (the original being as dead as a dodo.) I had expected the cable to work just as well with the little TH-F7E, because the Kenwood speaker-mic I have works with both radios. But although PTT works on the smaller Kenwood there is virtually no audio. I have to turn the audio up to maximum on the FoxTrak to get enough signal to be decoded by my gateway, and the deviation is still too low.

I am completely foxed by this problem. The only thing I can think of is that it is something to do with using two separate plugs and not the proper moulded two-pin connector used by the speaker-mic. Perhaps, as with the Motorola, the wide body of the plugs is preventing them from going far enough in to disconnect the internal microphone, which is shorting out the audio. Unfortunately the only way to prove this hypothesis would be to buy a cheap Kenwood speaker-mic or programming cable on eBay and cut the cable off. It’s a bit of a gamble, as I don’t know for sure if that’s the solution, and the cables in some of those cheap mics from China are very poorly screened so I could end up with an RF-induced problem.