The objective of today’s walk was Fellbarrow, a minor Wainwright fell WOTA number LDW-199 in the North Western Fells. It had never been activated before and I thought it would be an easy walk, so off I went. 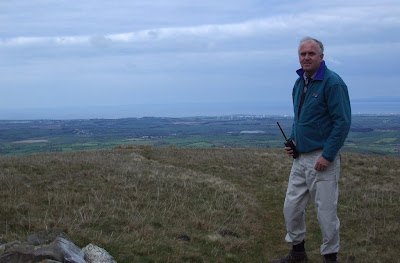 I set off along the lane that goes behind Whin Fell. By a field gate I was checking the map to see if this was where I turned off the lane to go up on to the fells, and someone walked by and asked if I was lost. I said I was just checking to see if this was the way to Fellbarrow and he said yes, you can go that way, so I did. After about 15 or 20 minutes of walking I found that I was at the far end of a large field surrounded by a dry stone wall with barbed wire on either side and no way I could see to go any further.

Eventually I did find a place where the wall had fallen down and it was possible to negotiate the barbed wire, only tearing my walking trousers a little bit. I carried on but found the directions I thought I needed to go blocked by walls and gates.

The trouble with these grassy minor fells is that they don’t look very distinctive so they aren’t obvious targets to aim for, and they are infrequently walked so there is no obvious path to follow. Basically, I was lost. APRSISCE on my mobile phone was no help as the mapping it uses contains no topographical detail at all. I tried Google Maps but it informed me that there was no network coverage so it couldn’t download any maps. I plodded on until I saw a path that descended into the valley and I decided to stop, have my lunch and go back. 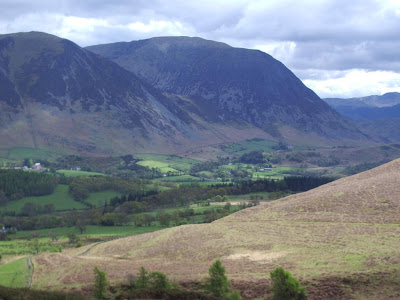 After lunch I decided I would follow some tyre tracks up hill just to see where they went. After about 5 minutes I saw a stile in the fence and a path. I followed this and after a couple more stiles found myself on the top of Fellbarrow with its Ordnance Survey trig point.

I got out the Motorola GP300, made a couple of calls on 145.500 FM and was answered by Colin 2E0XSD. However despite a take-off that covered Whitehaven, the Isle of Man, Workington, Cockermouth and the Dumfries and Galloway area of Scotland I got no other responses. I checked the repeaters and heard Richard MI6BJG/P putting a call into the GB3GI repeater. He was walking into Belfast with a hand held radio and we had a chat for a few minutes until he started dropping out of the repeater. I also heard a repeater GB3BT on the channel marked for GB3EV, which I later found is at Berwick on the north-east coast.

I still couldn’t raise anyone on FM simplex, so I decided to come back. The return route was a bit easier and used the path I should have taken if I had walked for another 5 minutes beyond the point that I was misdirected. I think I need GPS software with OS maps on my HTC Touch.