The WA5VJB cheap Yagis are a great way to get on VHF/UHF without spending a fortune on commercial antennas.  While it is practical on the UHF/microwave bands to use a copper driven element, it is less practical on the 144 and 222 MHz bands.  I know that McMaster carries copper and brass rods, too.  But, I also like to have a coax connector at the feedpoint.  Since I am in the process of building what amounts to a “super cheap Yagi” (note that’s not a “super-cheap Yagi,” the hyphen matters; will report on this in the future), I figured I would share my feedpoint for aluminum driven elements.

While wandering through the electrical aisle of the local big box hardware retailer about six months ago, I discovered the Thomas and Betts ADR6-B2 (try the ADR6 for a drawing of a similar part) grounding lug.  This looked like a good candidate for the cheap Yagi feedpoint, especially costing only $1 for a pair.  In order to fit an SO-239 flange-mount connector to the ADR6-B2, I cut off the portion of the lug with the bolt hole and drilled my own hole (#43) and tapped it 4-40.  I did the same to the other piece.  I did not cut off the lug on the second one, but I should.  Then, I soldered a short piece of wire to the center conductor of the SO-239 jack and added a lug to it.  Here are the parts so far:

Then, I assembled the whole mess on the J-shaped driven element (dummy used for photos) using two 3/8″ 4-40 screws and a lock washer.  Note that the ADR6 lugs are installed on opposite sides of the element. 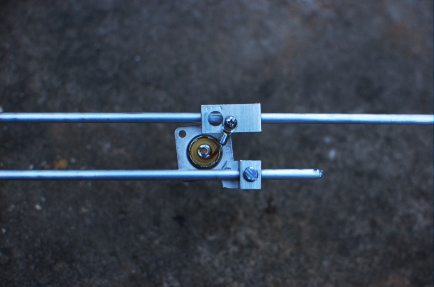 And, after installing on the wooden boom, it looks like this: 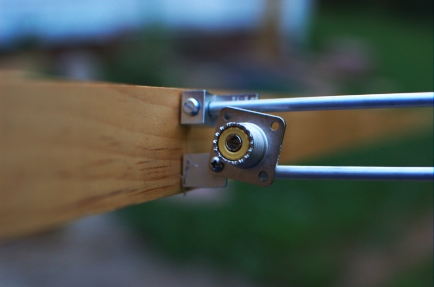 It’s not quite square and some mechanical strengthening is in order before it goes up in the air.  But, this is a considerable improvement over what I’m using now.  Ty-wraping the coax to the boom will provide considerable relief to the connector and it’s attachment.  More details will be forthcoming on the antenna, if it works.  Stay tuned!