The Micro SD card I ordered arrived on Monday so I was eventually able to try installing the Google Android OS on my HTC Touch Pro. The delay turned out to be a benefit as I was able to take the advice of Eric SA5BKE who commented to my earlier post that he had found a better set of installation instructions to the ones I mentioned. 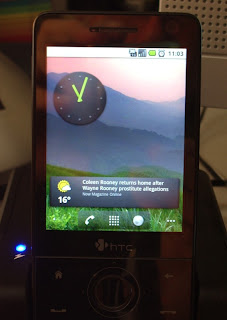 Still, as usual when I try to do anything with computers, if something can go wrong it will. First, the phone could not see the new SD Card. I had to format it with a utility from the SD Card Association. Then I messed up the screen calibration where you have to click, when prompted, on the corners of the screen, and wasted some time trying to recover from my mess-up. But eventually I was rewarded with the sight of the Android home screen on my HTC Touch Pro.

The effort was worthwhile. I really like the Android OS. It is so much better a smartphone operating system than Windows Mobile 6.1. You still feel that you are using a phone, not a Windows PC that has an annoyingly small screen. Making phone calls and sending text messages is really simple, as it should be. And once you have found out how the new OS is supposed to be used (since the download doesn’t come with a user guide) it’s easy to use.

I am a huge fan of Google – I have five GMail accounts and probably make hundreds of Google searches a week – and what I really like about Android is the way Google features are integrated into the OS. Until now I could never understand why people liked smartphones and would actually want to use them to answer email because my experience was based on trying to access GMail using one of the two awful web browsers on my Windows phone. But now I get a notification whenever a new email comes into any of my inboxes and I can either clear it or click on the email to read it in full or reply on a display designed to make full use of the small screen. I guess that’s how other smartphones work if you have a corporate mail server running Microsoft Exchange, but I’ve never had one.

I was also very impressed with the Google search widget on one of the virtual desktops of the home screen. It had a microphone icon so, out of curiosity, I clicked it and was invited to speak. A moment later it typed what I had said into the search box and was performing a search on it. Fortunately I hadn’t said something rude! I then had some fun composing emails and text messages without using the keyboard. Unfortunately the speech engine doesn’t recognize words like “comma”, “full stop” or “newline” as punctuation and formatting, nor does it recognize commands like “send.” But I was very impressed with the accuracy with which it understood what I said – the last time I tried voice input was at least a decade ago on a PC and I found it ultimately frustrating. 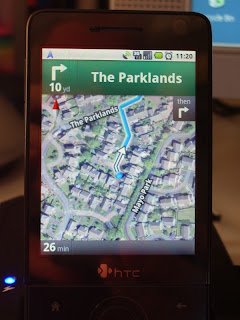 One of the applications I was keen to try out was Navigation, Google’s free satnav program based on Google Maps which is not available for Windows Mobile. I haven’t had a chance to test it in the car, but it seems like the full works, with a text to speech engine that barks directions at you. The optional but probably rather unnecessary satellite view looks rather cool, though I was rather less impressed by the route it suggested from home to Keswick, south-east of here, which involved turning right at the end of the cul-de-sac and going north, then west for a mile to reach the A66 before going east, instead of turning left and heading east which would save best part of two miles. My old satnav does that too, but that’s because the estate hadn’t been completed when the maps were made and it believes the top of the estate is still a building site.

The Android Market contains thousands of apps that you can download, either free or for a modest charge. However, sorting the wheat from the chaff seems like one of those things life’s too short for. It reminds me a bit of the early Windows “shareware” market when anyone who had taught themselves Visual Basic thought they would be the next Bill Gates by releasing some flaky software that did very little and usually crashed as soon as it experienced some condition the programmer hadn’t thought of.

There seem to be very few ham radio applications, though, and almost no really good ones. I saw quite a few apps to do with Morse, giving the lie to the idea that code is dead, but nothing that looked worth trying. The only professional quality radio application I could find is the new EchoLink client for Android.

My feelings about this have mellowed a bit since I wrote about it just over a week ago. Last Friday just before dinner I received a call through my EchoLink node from Practical Wireless VHF columnist and fellow blogger Tim Kirby, G4VXE, who was on his way home from work by train and called me using the EchoLink client for his iPhone. Though we’ve exchanged blog comments a few times it was very pleasant to speak with Tim for the first time. This was a contact we would be unlikely to make over radio and certainly not in that particular situation. Only EchoLink made it possible.

In the interests of research I had a conversation with myself using the EchoTest server and found the audio quality to be just as good as when I use my Kenwood TH-F7E to make contacts via my RF node. However the cellphone client has one disappointing limitation. You can’t make a direct connection using the cellular network. You have to use a communication option called “Relay” which only allows you to call other non-cellphone EchoLink users. It doesn’t allow other EchoLink users to call you. It’s a bit like having a radio and not being able to call CQ. 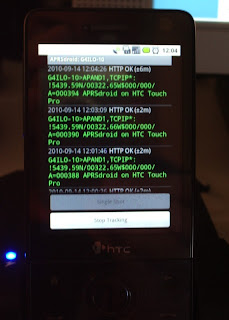 I was somewhat unimpressed by the Android APRS app, APRSdroid, not just in comparison with Lynn, KJ4ERJ’s APRSISCE for Windows Mobile, but even with the iBCNU app for the iPhone. The user interface is basically a console window: you can see position packets going out, and if you wish you can see raw packets of other users within a selected radius of your location. There is no support for messaging at all in the present version.

Tracking doesn’t seem to work very well either, unless you are also running another application such as Navigation that keeps the GPS on all the time. I think the problem is that the app tries to save power by turning on the GPS, waiting for a fix and then turning it off again until the next time interval. It didn’t work too badly when the phone was sitting in its charger cradle on my desktop, but getting a GPS fix when you are moving can take a very long time. There is a need for a simple APRS tracking and messaging application for Android but this has a way to go before it gets there.

The HTC port of Android OS is not an official release and has quite a few bugs and things that are still To Be Done. I’ve had the phone lock up and fail to respond to anything and have had to pull the battery a few times. There is no support for the built-in camera and the battery charge indication is completely fictitious. It’s also best not to use wi-fi as it warms up the phone and consumes a lot more power than under Windows Mobile.

Unlike most people I bought my HTC Touch Pro SIM-free and unlocked because I don’t like to be tied to a network. As a consequence I’m not going to be offered an upgrade for no extra cost when my contract runs out. I need to keep the phone for a while but I’d be more than happy to dump Windows Mobile because as a phone it’s too much hassle, even though it does allow me to run some pretty powerful applications. I hope that the issues with the HTC Android port will be resolved in order that it becomes stable enough and functional enough for me to use it on my phone all the time.