Enough with the nitrates, already !!!!

There’s a couple of threads going on the KX3 e-mail reflector today. One is titled “QRP Baloney” and the other “QRP Sausage”.  Both threads are a “discussion” trying to determine what QRP “really is”.

I, for one, originally thought that QRP was making sure your transmitter put out 100 Watts or less. Well, that was back in the “Ancient Times”, in the Mesozoic Era when I originally joined QRP ARCI. 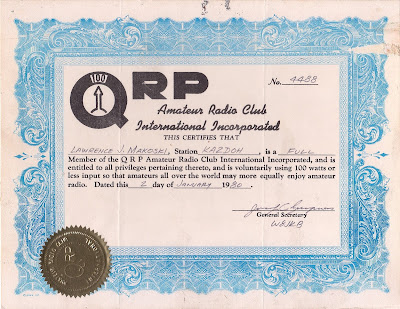 Somewhere along the line, that changed and the definition of QRP became a power output of no more than 5 Watts for CW and 10 Watts for SSB.

I am fine with that definition. Period.

Now we have some purveyors of bologna that are insisting that QRP means “5 Watts with ONLY simple, non-gain type antennas”.  Wow!

Somehow it’s not in the “Spirit of QRP” to do as much as you possibly can with that 5 or 10 Watts.

For the record, my antennas (currently – might add a W3EDP soon) are simple, and non-gain – a Butternut HF9V ground mounted vertical and an 88′ Extended Double Zepp wire . But while I am sleeping tonight, if the Angel of the Lord appears in a dream and says, “Lawrence, the Father has decided that you have truly been a good and faithful servant lately.  In appreciation, when you wake up tomorrow morning, in your backyard He will provide a 40 foot tower with a multi-band Yagi mounted at the top”.

What? Am I supposed to say, “Dear St. Michael (or Gabriel or Raphael – whatever), I am a QRP Purist – could you tell the Lord to make that a Buddipole instead”?

The concept of QRP is to limit your power output.  If you take that 5 or 10 Watts and pump them into an antenna “fire hose” so that you SOUND like you’re pumping out a kW, then I say “Bravo for you”.  The true “Spirit of QRP” is “doing more with less” – taking those Watts that you’re using, and with a combination of good operating skill and the best antenna you can muster, putting out the best signal that you possibly can.  That’s it – no more, no less.

If you listen to the purveyors of bologna, I guess they would also tell you that a guy pumping 500 Watts into a 6 inch piece of copper at ground level is actually QRP.

No …… that would just be stupid.

72 de Larry W2LJ
QRP – When you care to send the very least! (But take the pains to make it sound like the very most!)

7 Responses to “Enough with the nitrates, already !!!!”