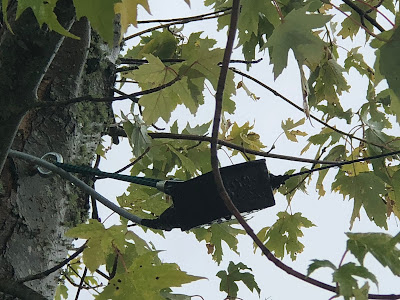 My Endfed antenna was put up on October 2nd with a few issues that I blogged about but mostly have been sorted out. Today was the test to see how it held up with some strong winds, today was the arrival of a Nor'easter here in the Maritimes. There was high winds and lots of rain, I did find that as it continued to rain the SWR on 40m could not be tamed by the LDG antenna tuner. All other bands were just fine. I was outside at one point when the rain slowed a bit to take out some trash. The one end of the antenna is just outside the back shed and I gave the Endfed wire a bit of a pluck like one would do to a guitar string. Water came off the entire Endfed antenna. I went back into the house and gave 40m a go again and all was well. I'm guessing a collection of water on the antenna affected 40m and I imagine over time more water would had affected the other bands.
Now back to wind vs Endfed antenna, the 9:1 balun enclosure is mounted in a tree with the other end mounted at the shed. Before putting up the antenna I had to devise a way of overcoming the tree sway  and the stress it would put on the antenna. I thought about using a spring but when I went to the hardware store here in town there were none  I felt would flex before any stress was placed on the antenna, the springs just had to have to much tension before they would start to flex. A comment I received on my blog regarding this very issue was to use bungee cord. These were easy to come by at the hardware store and I decided to use it. My installation consisted of 2 bungee cords just incase one became effective and let go.
Today as the wind gusts picked up I noticed the tree that the 9:1 balun was on was swaying a lot but the bungee took up the flex and allowed the Endfed to hardly even move. Up to this point in time the Endfed only had to deal with a slight breaze but today it was put to the test and it passed without issue.
Mike Weir, VE9KK, is a regular contributor to AmateurRadio.com and writes from New Brunswick, Canada. Contact him at [email protected].

12 Responses to “Endfed vs Nor’easter!”