EME with a handheld

This morning I made a 6 element Yagi for 70cm using some 25A copper mains wire with the insulation stripped off and a length of wooden dowel. I copied the design from CT2GQV’s blog. The object is to see if I can hear radio signals bounced off the moon. 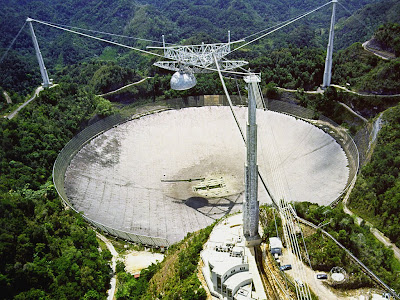 If you didn’t know, a bunch of guys that include Joe Taylor K1JT of WSPR fame have got permission to use the 1000-foot dish of the Arecibo Radio Telescope (shown above) for a couple of hours each day over this weekend to make radio contacts via EME. Using full power their signals should be strong enough to be heard using a hand held yagi and it should be possible to work them using just 100W with the same antenna.

I only have the FT-817 with 5W so it isn’t possible to try to work them, but I thought I would try to hear them, which is why I made the antenna. I think you’ll agree that their antenna is more impressive than mine! There are, of course, no 70cm signals to test it on, but there are plenty of noises and the yagi seems quite directional. The SWR is about 1.7:1 at 432MHz and falls gently as you go lower in frequency, but I’m not sure how to adjust it so I’ll leave it as it is for the moment. 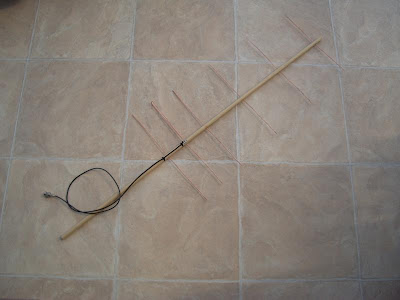 The first session was yesterday. Unfortunately their PA blew up so they were only able to run 25W of power. Some contacts were made, but obviously not with people using low power and hand held antennas. Hopefully they will have got a PA working in time for the remaining two sessions, otherwise I am not going to hear a thing.

This evening they should be on between 1740 and 2020 UTC – that’s 1840 to 2120 BST. They will be transmitting on 432.045MHz using SSB or CW. Their call is KP4AO. The moon is only showing quite a thin crescent at the moment so it may not be easy to spot during daylight, even assuming the sky is clear as it is here. If you are in the UK the moon will be at an elevation of about 45 degrees to the south-west at the start of the session, declining to about 25 degrees due west by the end of it. If your QTH is elsewhere you can use this web site to locate it.

Fingers crossed that they get the PA going so we can have a chance to hear something. If not, the antenna won’t be wasted as I’ve been meaning to have a try at satellite communications.