After building the house here on Mayne Island, in the early 90's, it was several years until I was able to set up a dedicated station. In the meantime, I limited my radio activities strictly to listening. I had a nice Icom R-71A set up in a hall closet and spent my radio-time, mostly on weekend evenings, listening to maritime CW, HF aeronautical traffic and, of course, NDBs below the broadcast band. My HF receiving antenna consisted of three inverted-V's ... one for 160m, the second for 80m and the third for 40m ... all fed from the same coaxial line at the top of a 70' Balsam. It didn't take long to realize what an exceptional radio location I had, living right at the edge of the ocean, with dozens of miles of saltwater in most directions other than due west. 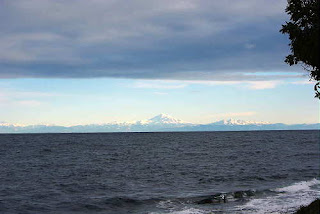 I really enjoyed following evening airline flights across both the North and South Atlantic, and in the early winter afternoons, following the commercial air-traffic all over Africa. Even though listening on 5 or 6MHz, I was amazed at how strong the signals from airliners over Africa at 30,000 feet or more could become, this far to the west. In the early mornings, directions were reversed and traffic from the far east, right into India, was fairly common. Often, small single-engine planes, usually run by various missionaries, could be heard while on the ground, taxiing at remote field locations and calling in via HF radio to request takeoff and flight-following.

Now, QSL's have always been one of my top radio interests and it wasn't long before I started sending and collecting verifications for both the aircraft and the ships I was hearing ... once I had figured out how to get my reception reports to their proper destinations. A very small portion of my 'utility' QSL collection is shown below. For the most part, it consists of PRC's or 'Prepared Reply Cards', with blank portions to be filled-in by the verification signers. Surprisingly, my return rate was around 90% and verifications were often returned with long, hand-written letters and numerous photographs ... especially from the ship RO's, as I suspect their days at sea were often quite monotonous. Even many of the military and commercial aircraft pilots would return a handwritten note along with the filled-in verification card, which I found even more surprising. It seemed that most were very surprised to hear that their radio transmissions were even making it this far and could be heard so readily. 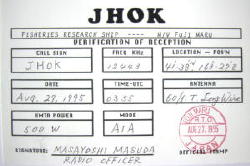 Some of the most interesting catches came from the Pacific, with a large variety of ships operating out of Japan. There are probably still several maritime CW stations operating in Japan. Many of these were owned and operated by commercial fishing companies and could be heard working fleet vessels throughout the Pacific on their daily CW skeds.

This interesting catch from the North Pacific was the Japanese 'fisheries research vessel' 'M/V FUJI MARU'. She was about 1200 miles NW of her CW contact, JNA in Tokyo. 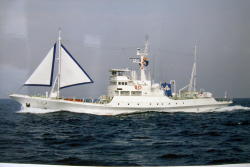 A Japanese cruise-ship, the 'M/V ORIENT VENUS' was logged early one summer morning while working JNA on 8355 KHz CW. Her position indicates she was in the Mariana Islands. 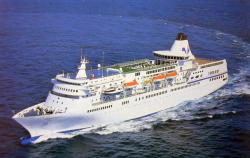 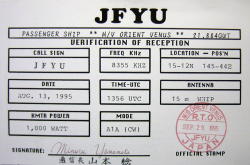 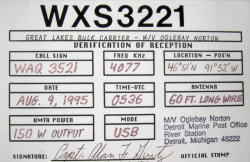 One of my first catches from the Great Lakes
was the 'M/V Oglebay Norton', a huge bulk
carrier out of Detroit. Her 150W signal was loud and clear late one August evening while in contact with WLC, Rogers City Radio. 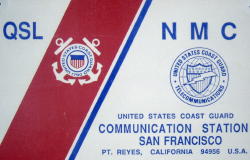 The U.S. Coast Guard is still one of the best QSLers around.
Several of their stations will QSL with a nice printed card.
NMC (San Francisco) and NMO (Hawaii) were two
catches, regularly heard on the old 500 KHz calling
frequency. 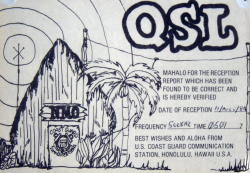 Stormy weather often provided a good chance
to catch a search and rescue mission in progress.

'Rescue 6008' was an HH-60J helo enroute from
Chesapeake Bay to Elizabeth City, North Carolina during
a midnight rescue operation. 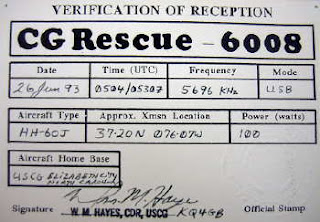 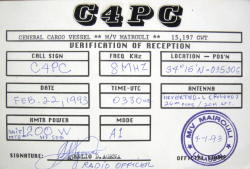 Although not my farthest HF maritime catch,
this was one of the most surprising. 'C4PC'
was heard early one February evening on 8 MHz CW, when conditions seemed terrible. No other ships were heard on the band at the time. As I learned later, the 'M/V MAIROULI' was at anchor near Beirut, Lebanon, a distance of nearly 7,000 miles from Mayne Island.

.... cont'd
Steve McDonald, VE7SL, is a regular contributor to AmateurRadio.com and writes from British Columbia, Canada. Contact him at [email protected].

3 Responses to “DX’ing The ‘Utilities’”