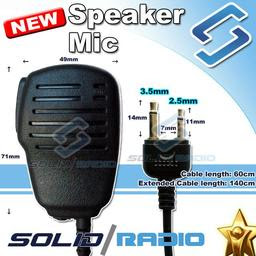 When using a hand held radio with a long whip antenna for more gain I often prefer to use a speaker mic so I can hold the radio in a steady, upright position. I have a speaker mic for the Kenwood TH-F7E (which fits the old TH-205E as well) and I have one for the Motorola GP300. But needless to say neither of them fit the Intek H-520 Plus 10m rig because the wiring and pin spacing is different. The official Intek speaker mic is rather expensive so I looked on eBay and found a speaker mic for “Alinco Icom Standard 2-pin” with the correct pin spacing for less than £7 including postage from Hong Kong.

When it arrived I decided to check what the audio sounded like by listening on the K3 while I made a call. The mic keyed the radio up but there was no audio. To make troubleshooting easier I swapped the antenna for a dummy load and audio was then heard!

I then tried a variety of different antennas and power levels and was soon pulling my hair out. I would hear audio with the dummy load connected and none as soon as I switched to an antenna. Eventually I tried the very short antenna supplied with the H-520 on the lowest power setting, 0.1W and I heard audio. It was looking very much as if the presence of radiated RF was somehow interfering with the audio. But the amount of RF required to cause the problem must be small as 0.1W on any of the larger antennas resulted in no audio from the speaker mic.

I didn’t know whether the RF was causing a problem with the microphone or the radio. I tried clamp-on ferrites at both the mic end of the cable and the plug end but neither made any difference so I was none the wiser. This particular made-in-China speaker mic is held together with screws that require a nonstandard five pointed key to undo so I couldn’t look inside to see if it used screened cable. I decided to give up on that speaker mic and do what I could have done in the first place if I hadn’t thought spending seven quid would be an easier solution.

In my junk box was the business end of another cheap Chinese speaker mic from which the cable had been ‘borrowed.’ I noticed in the past that the curly cables used for these speaker mics are often not screened. I happened to have a length of stereo audio cable with each channel separately screened. I wired this up to the spare speaker mic and attached suitable 2.5mm and 3.5mm jack plugs to the other end. When I tested it I now had transmit audio even on high power with the 4 foot telescopic whip!

At this time I don’t really know whether the mic I bought was at fault because I don’t have another radio that uses the same size plug spacing to test it with. Given that I have been less than impressed with other aspects of the H-520’s performance I wouldn’t be surprised if it wasn’t the radio that has inadequate filtering for RF picked up on the speaker mic cable.