One of the things I have long wanted to do in this hobby is build a hand-held transceiver. I tried once back in the 1970s but the receiver didn’t work and the project eventually ended up in the garbage. Many months ago while browsing Roger G3XBM’s website I came across an old project of his called the Fredbox, a small, low-power hand-held 2m transceiver. This rekindled my desire to try to make my own VHF handy transceiver so I started the process of accumulating the parts that would be needed to make my own Fredbox.

However there were two problems. Roger designed the Fredbox as an AM (amplitude modulation) transceiver, a mode that was probably still in common use back in the 1970s when he first made it. Here, the only chance of making a contact with such a radio is if it transmits on 145.500 in FM mode, so I would have to modify the transmitter to produce FM instead of AM.

The other problem is that the Fredbox transmitter is crystal controlled. The days when suppliers advertised crystals for popular FM frequencies in RadCom at reasonable cost have gone, along with the crystal controlled transceivers that used them. I didn’t know where to obtain the crystal I would need but hoped that someone might have crystals from an old 2m radio that they wanted to get rid of. 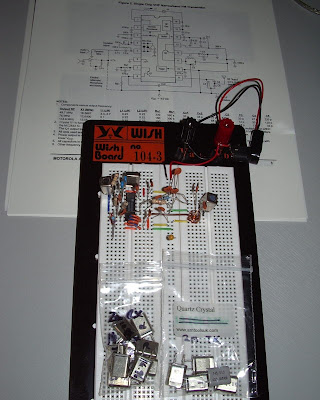 My luck seemed to be in when, a couple of months ago, someone started selling batches of 2m crystals from old Japanese radios on eBay. I bid for and obtained three batches containing crystals for 145.450, 145.500 and 145.550MHz. I don’t know what radios these crystals were originally for or what oscillator circuit they were used in but by using the XBM80 as a test oscillator it appeared that most of the transmit crystals oscillated at around 12.1MHz.

I tried breadboarding the first oscillator stage of Roger’s Fredbox circuit in order to experiment with ways of FM-ing the signal but the crystal did not seem to be oscillating. I did some searching for other 2m FM transmitter circuits in the hope of getting some inspiration and came across one using an MC2833P IC – a complete FM transmitter on a chip. This seemed like the ideal solution, especially as the crystal used to get 144MHz output was 12MHz just like the crystals I had. Unfortunately I couldn’t find a supplier of this chip until on a whim I typed the part number into eBay. There was someone selling one chip! I ordered it and it arrived in the post this morning.

I built up the circuit from the application note on my breadboard (as you can see in the photo) but to my dismay I could not detect any signal when using any of my 2m TX crystals. It was very disheartening. I didn’t know if the chip was dead, whether I’d blown it by accidentally shorting together wires from components on the breadboard, or whether it was just a very fussy circuit. I experimented with different components and coils and got nowhere. I was just going for lunch when I had the idea to try one of my QRP CW frequency crystals. I had one for 10.106MHz and another for 14.060MHz. With both of those crystals I could detect not just a strong carrier on the fundamental frequency but also plenty of output in the 140MHz region. The chip is working, the problem is my eBay crystals!

The question is, what to do now? I guess the crystals I bought, being probably 35 years old, have deteriorated with age and are reluctant to oscillate. It appears that the only way to proceed with the project is to get a brand new 12.125MHz crystal custom made, if possible.