Martin, G8JNJ, sent me an email with some suggestions for getting the super-regenerative Fredbox receiver to work. He also sent me a link to the blog of Steve, G4AQB, which mentions the Practical Wireless CQ2 receiver design on which the Fredbox receiver is supposed to be based. I remember the name “CQ2” and the picture on the magazine front cover and circuit diagram shown on Steve’s site look similar to the receiver I built in the early 70s to listen to the 2 metre band which finally gave me the interest to get my Class B (144MHz and up) amateur radio license. I seem to recall that the article also had detailed drawings of how the components in the receiver were to be laid out. 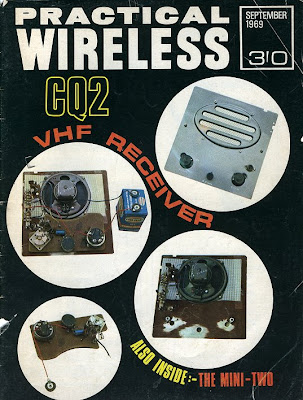 Steve writes that he mounted the receiver on an aluminium front panel but that this played havoc with the tuned circuit so he rebuilt it on a piece of plywood! My memory is pretty poor these days but my recollection is that I built it into an aluminium box of the sort that you could readily buy from the local radio parts shop (those were the days when there were local radio parts shops!), like a box with a lid secured with two self tapping screws. The box stood on its side so the lid was the front panel of the receiver.

Steve writes that he built a quad antenna to use with the receiver. My antenna was a dipole mounted on a wooden stand in my bedroom and fed with a few feet of audio co-ax, since at the time I was ignorant of coaxial cable properties like impedance or loss! In those days I lived with my parents in Rayleigh, Essex. I was able to receive the local police on the CQ2 receiver, as well as amateurs in the Southend area such as Barry G8HNX, John G8IDI and Chas G8HVS. I could receive the GB3VHF beacon from Wrotham, Kent, and also a couple of old-timers who had a regular sked: G6LL whom I think was in Hertfordshire and G5OX who may have been in Ashford, Kent (or perhaps it was the other way round.) This was nearly 40 years ago and I’m surprised I can still remember any of it!

Steve also writes that the radiation from the super-regenerative receiver wiped out the local TVs. I don’t remember that, fortunately, or an end may have been put to my aspirations to be a radio ham before they even started!

But my first proper transceiver – a Hudson AM108 ex-taxi radio that I bought for £5 at the RSGB Woburn Rally in 1973 (which was actually before I was licensed) caused patterning on my parents’ TV on receive! After I got my license I soon found that it caused serious breakthrough on my father’s stereo hi-fi on transmit as well, so my operating was done mobile /M from the car after that.

Later I built my own 4-channel 2m FM transmitter (using tubes, to another PW design) which I used in conjunction with a Microwave Modules receive converter and my short wave receiver (also home built, using tubes, from a PW design.)

So much fun with such primitive equipment! I often wonder if all the technological advances we have today have really added to the enjoyment of the hobby.