27 October 2009 | by Paul WW2PT  |  Share |  Tweet |  Leave a Comment (0)
My first major contest with the K3 — not a major effort, mind you, just a major contest, and it leaves me smiling. I could only squeeze in around 10.5 hours over the weekend, just enough to give the station a good shakedown under contest conditions and leave me hope for the future when I add an amp and a better antenna.
The K3 was a champ. With the latest DSP noise reduction tweaks I found it possible to run with RF Gain full throttle and not have the background noise kill me. Auto Notch took care of the tuner-uppers and the SWBC carriers on 40m. Left NB off most of the time as there was little QRN for a change, and the noise from the plasma TV was easily notched out with manual notch. All that was left was the DX.

Things started out rough Saturday morning (UTC) on 40m. Worked TO7M on my first call then spent a frustrating hour or so with no contacts. After a break things started to improve a little. Stayed at the mic until around 0600 UTC (2 am local) and landed 12 countries/7 zones on 40m, plus Canada (zone 3) on 80m. Worked 20m and 15m for about an hour and a half in the morning before going out and about, and again early Saturday evening (UTC Sunday) for about a half hour. Worked 13 countries/9 zones on 20m, and 3 countries/3 zones on 15m. Sunday saw fairly good conditions on 15m (14 countries/7 zones) and 20m (9 countries/7 zones). 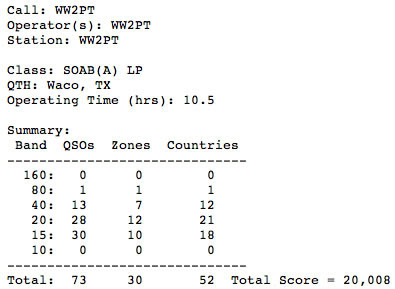 Update 10/30: Was filling in some of the blanks in the HRD Logbook tonight and discovered one of the US stations I worked during the contest (K8PO) was in Maine. It didn’t immediately dawn on me because of the K8 prefix, but according to QRZ he’s in Union, ME. That’s #49 on my WAS tally sheet, just need Delaware now…

Paul Lannuier, WW2PT, is a regular contributor to AmateurRadio.com and writes from Texas, USA. Contact him at [email protected].