13 November 2009 | by Paul WW2PT  |  Share |  Tweet |  Leave a Comment (0)
Almost as much fun as finding a $20 bill in an old coat is finding an old contest log on an even older hard drive! Today I discovered my log data from the 1996 CQ WWDX SSB contest, which I must have exported from Log Windows before my erstwhile Toshiba laptop screwed the pooch back in the late 90’s.
After some data mud wrestling, I was able to convert to ADIF and import into HRD and saw my total DXCC worked count jump from 119 to 123 (the “new” ones are 3DA Swaziland; FS Saint Martin; V4 St. Kitts & Nevis; and GU Guernsey).
I then uploaded the new QSOs to LoTW and immediately had 13 new QSLs credited to my account, with a handful of new DXCC/bands confirmed: VP5 Turks & Caicos (80m); P4 Aruba (15m); 8P Barbados (15m); V2 Antigua & Barbuda (15m & 20m); and GI Northern Ireland (20m) — the latter two being all-time new ones confirmed, bringing my DXCC confirmed count to 80, and DXCC Challenge totals to 239 worked/123 confirmed.
God only knows how many of my other contest logs are gone forever — I must have worked at least another dozen contests back around that time, and all these logs got nuked along with the Toshiba. This is why I now keep separate paper logs as backup.
Also found this photo of the old N2HIE shack in Closter, New Jersey circa 1998. 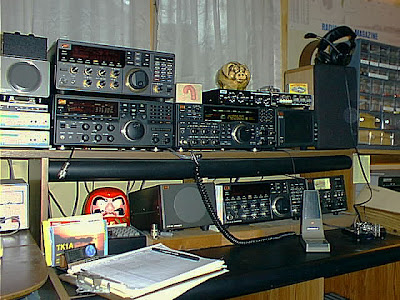 Complete with that utterly dreadful JRC NVT-56 desk mic. Wish I held onto that, seeing how one just sold for over $1,300 on eBay. Please, stop laughing… I’m not kidding:

WTF is wrong with people? Clearly some hams have more money than sense…

Paul Lannuier, WW2PT, is a regular contributor to AmateurRadio.com and writes from Texas, USA. Contact him at [email protected].