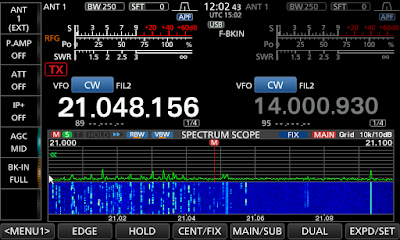 Another CQWPX CW contest has come and gone and this year for me it was a parttime effort as the weather was great here and many outdoor "Stuffs" had to be done. I was shocked to see 10m open and I was able to bag 7 contacts there. During my first leg of the contest on Saturday, I found it very hard to contact any Europian stations. I did make one into Ireland and that was it. The second leg of the contest was Sunday and it seemed that Europe had opened up just fine and I was making DX contacts. The only issue during the short time I was taking part in the contest was the XIT issue which I posted about a few days ago. The other issue was right at the get-go of the contest, I was not able to get the N1MM CW macros to key up the Icom 7610. I have been working QSO parties Win4Icom rig control software looks after N1MM+ as 3rd party software. I do this because I can control the 7610 via my mouse using Win4Icom software. So things like band changes, fine filter adjustments, APF on and off and so on. I did not want to play with the issue for too long as I was not really going to be in the contest for all that long. I ended up going back to old school operating.....well almost old school no paper and pencil yet. I shut down Win4Icom and configured the N1MM+ com port to talk directly to the 7610. In minutes I was up and running again. 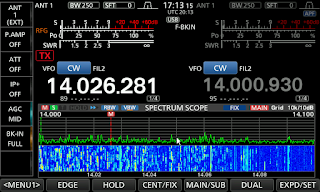