WSPR – The system for Weak Signal Propagation Reporter makes it easy to compare antennas if your transmitter can easily switch antennas. The system shown here can send on antenna 1 for almost two minutes and then switch immediately to antenna 2 for the next transmission.

The Ultimate 3S already has software that supports that and application note 3 from QRPLabs (Controlling additional relays using the Ultimate3S “Aux”) describes how. I built mine following that note and the experience from EA1CDV.

The circuit is controlled from pin D7 and consists of a transistor, a relay, a resistor and an electrolytic capacitor. In addition I have two LEDs that indicate which antenna which is in use. In the first picture the green LED in the back right under the BNC antenna connector shows that antenna 1 is connected. 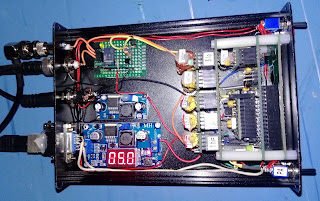 In the next picture, the whole layout is shown a little better. In this case LED 2 is lit, the faint yellow one. It sits right under the additional SMA antenna connector in the top left-hand corner that I had to fit.

I have used this setup for a few days now on 7, 10, 14, and 18 MHz with some crossed doublet antennas (somewhat like this setup, but not in the same location). I change the frequency between antennas, e.g. 50 Hz below the center frequency of the band for antenna 1 and 50 Hz above for antenna 2 in order to simplify discrimination between the transmissions.

The short 13 m antenna transmits best East-West, and the longer 26 m antenna North-South. The directivity is in general confirmed by the WSPR reports I see. Sometimes the difference can be more than 10 dB in SNR, but more often it is closer to 5 dB. But it also happens that only one of the transmissions is detected. This should make for some interesting analysis in the coming months.