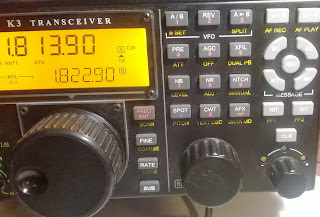 Tonight I sat down to fiddle with the macros of my Elecraft K3. As I already use M1-M4 for CW memories, I only had the PF1 and PF2 buttons available.

It was the blog post “K-3 Rotating Macros” of W8TN that made me aware of a clever trick for using a macro to reprogram itself. This gives the possibility to have two rather than one function in the PF2 button. My need is for a button that can toggle between the typical pile-up functions Split+1 and Cleanup. In addition I have another macro that toggles speakers on and off.

The two first macros resemble those of W8TN, but are not quite the same:

The Split macro in memory 1 means: 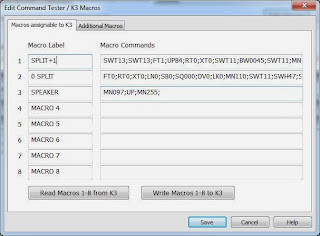 Some may want to add SB1 to turn the sub receiver on, or LK1 to lock VFO A. Others may also want to change the number after the UPB command in order to set other splits than 1 kHz, or set the bandwidth differently than the BW0045 command. See the “K3 and KX3 Programmers Reference” for details.

Entries 10-13 are the reprogramming steps where the PF2 button is reassigned to the cleanup macro in memory slot 2. The contents of that macro is:

Here items 9-12 are the reprogramming steps where PF2 is reassigned back to the first macro, the Split+1 macro. The PF2 button is the same as XIT (Transmitter Incremental Tuning) as a reminder that this macro affects the transmitter frequency.

Since I often toggle between speakers and my Koss PortaPro headphones (connected to the back of the K3), I liked what I just found on the Elecraft list where the command for speakers on/off was reposted. I have assigned that to the PF1 button which is also the RIT (Receiver Incremental Tuning) reminding me that this affects reception.

Since the Speaker+phone menu entry only has two states this will toggle speakers on/off.