13 January 2015 | by Mike AD5A  |  Share |  Tweet |  Leave a Comment (0)
As many QRP'ers, I'm a CW enthuisiast. Before I earned my license, CW was an imagined barrier. I imagined how difficult it would be to learn and that it would the ulitmate reason for me failing to get my license. However, for me, after I tried it it came to me relatively easy. I went from 5 wpm to 20 wpm in 11 months as I advanced to Extra Class. As most of us do, I started with a straight key and moved on to paddle and electonic keyer.
During my process of learning code, I had read about, and seen at hamfests, these telegraphy devices called "bugs". Interesting looking contraptions these bugs, but could a person really master one of these things. As I was intimidated by the code initially, so I was intimidated by sending code with a bug. You must understand, of course, that I never attempted to send even a dit with a bug, because I was certain it was difficult.
The past Straight Key Night I was in Santa Fe, NM having a New Years Eve dinner at the QTH of Fred, KT5X, and in the company of John, K1JD. It was assumed by both of these experience bug users that I too was proficient with that instrument. As we retired to the radio shack after a fine dinner with our wives, I was introduced to the bug. I was actually able to send my call after a brief tutorial from Fred, although he forbade me to send actual code over the air after a few of my awkward attempts. but I was able to manipulate the bug. How about that, not as hard as thought. Fred also collects and restores bugs and has a lot of knowledge of the time frame of manufacture and the rarity and nuances of collectible bugs. To get to the point, I was quite enthuisiastic about learning this part of the craft and the history of the bugs was quite interesting to me.
So after a trip (or two) to EBay, I am now the proud owner of a Vibroplex Original from 1944. I've gotten to the point that I'm not afraid to call CQ and have a QSO with the bug. I have, however, been calling all my CQ's to date on my KX3 at 5 watts. I want to keep the damage to my CW reputation to a minimum:-) It's quite fun and leaves you with a sense of accomplishment. 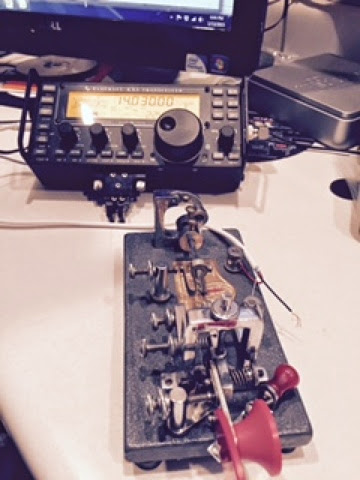 As you see from the picture, the bug is almost as big as the KX3, but its lots of fun. I am now certain that using bugs will always be a part of my CW repertoire. If you don't want to get hooked, don't try it.
One word of advice, find someone to coach you on how to set up the bug. As you can see above, there are lots of knobs to turn to get to that feel that you like.
Mike Crownover, AD5A, is a regular contributor to AmateurRadio.com and writes from Texas, USA. Contact him at [email protected].