Being taken for an idiot 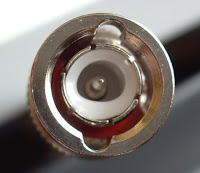 I just received a phone call from the service department at Waters and Stanton who had just received the faulty helical antenna I returned to them.

I was asked: “What frequency did you use it on? It looks as if it as been used to transmit at high power on the wrong frequency.”

Do they imagine that it would be possible to overheat an antenna in such a way as to melt the connector without having any effect on the antenna itself, leaving the connector impossible to attach to a socket? You would think perhaps the fact that the antenna was untrimmed and the top cap not placed in position would give the game away that I hadn’t even used it.

In fairness, they did then agree that it must have been a manufacturing fault and they would send a replacement. But I was left feeling that I had been taken for an idiot. They didn’t even have the grace to apologize to me for the inconvenience of receiving a faulty product.