Baofeng in my shirt pocket

Only a few days after I had ordered the little Jin Ma Tong JMT-227 145MHz transceiver from China, news began to appear of a new miniature Chinese transceiver from Vero Telecom called the UV-3R which was a dual band (136-174 and 400-470MHz) transceiver. Eventually these began to appear from eBay sellers under the Chinese brand name Baofeng. The price was an astonishing £25 plus postage from Hong Kong. I ordered one from the seller hk360radio and it arrived in just over a week. 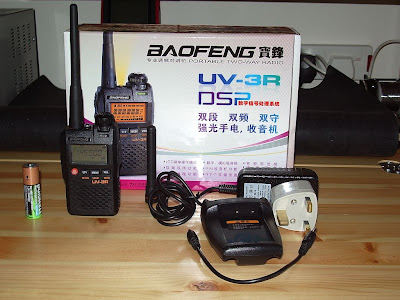 The Baofeng UV-3R comes in a colourfully printed box. Together with the radio the box contains the battery (Li-ion 3.7V 1500mAH), a charger with two-pin socket and adapter for UK mains sockets, two antennas (one for VHF and one for UHF), an earpiece/microphone similar to a mobile phone hands-free kit and a manual written completely in mostly pretty good English. There is also a blue carrying strap carrying the seller’s name which is so cheap and nasty it is unlikely anyone would use it.

Not mentioned in the manual’s list of included accessories but also supplied was a cradle that can hold the radio while charging the battery externally. Why you should wish to do this when you can charge the battery installed in the radio I have no idea. There are no charging contacts on the radio, you have to charge it by inserting the small barrel connector into the socket in the side or by taking the battery out. There is also a short cable with one of these barrel connectors on each end, the purpose of which no-one figured out yet.

The UV-3R makes the JMT-227 look a quality product. This is the first new electronic product I’ve had that didn’t come with a peel-off protective film over the display. The plastic casing is extremely thin and the plastic belt clip that can optionally be attached looks as if it would easily break. To be fair, the flimsiness of the Baofeng may not be due to cheapness but to save weight. The radio is extremely small and very light, just 125 grams (5 oz) with battery inserted and antenna attached.

The provision of two separate antennas for VHF and UHF may be a cost saving measure or it may be for efficiency reasons (a single band antenna is usually more efficient.) However it is not convenient for a user who wishes to make regular use of both bands. The antenna connector is an SMA female, as used by all the Japanese ham radio manufacturers. Frequent changing of the antenna will result in wear of the connector and ultimately a poor contact as the centre pin of the antenna rotates in the socket. Some eBay sellers are now supplying this radio with a single, dual-band antenna. This is something to look out for when buying.

I had originally intended fitting an SMA to BNC adapter to the Baofeng as I have with all my other handheld radios but the UV-3R is so small and light that it seems inappropriate. I doubt that the radio is ruggedly enough constructed to take the stress of using one of the larger BNC antennas in any case.

Confusingly, the rotary switch on top of the radio must be pulled up before it can be rotated. Once you have realized that, the UV-3R is easy to use and easy to program the simplex channels and local repeaters into the memories by hand. There is free programming software available on the web. Programming cables are becoming available to buy on eBay but it isn’t necessary to use the software, unlike with early models of the UV-3R which had very limited menus that did not allow the changing of things like step size or power level except through the programming software. (This is something to bear in mind if considering buying a used one.)

But this radio is evolving rapidly. The manual that came with mine describes 12 different menu settings but the radio actually has 18. Every setting you would want to change can now be set through the keypad. The settings are also stored in the memories – even the selected power level, so that I can have the radio use low power whenever I use it to communicate with my Echolink node. Perfect!

The one thing it does not seem to be possible to do without the software is to program cross-band splits, such as listen on UHF and transmit on VHF. This could be useful for working FM satellites. But I am not very bothered about this.

All the usual RX and TX tones are supported for repeater access. A 1750Hz tone burst is generated by pressing PTT + VOL. The radio also receives Band 2 FM. The quality is not very good, but on the plus side FM reception is interrupted if a signal is received on the currently selected amateur frequency. 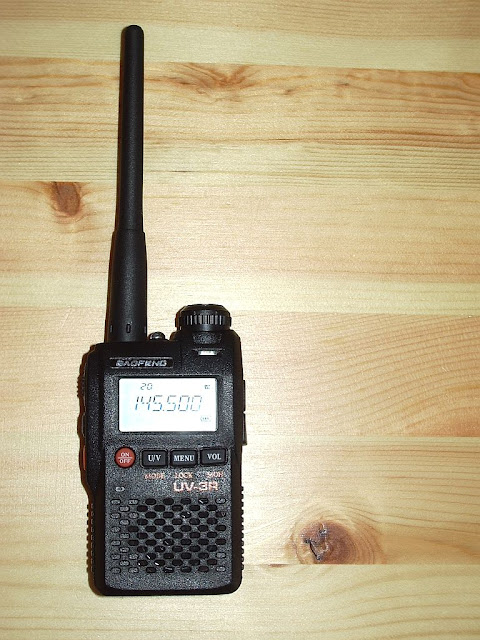 The performance of the little radio seemed to be well within spec. On a fully charged battery the output power on 2m was 3W on my QRP power meter. On low power it was 400mW. The sensitivity is also excellent. The box and some advertisements claim the UV-3R uses DSP. As no schematic is available I have no idea. All I can say is that the received audio is very clear and pleasant and that the signal to noise ratio receiving a distant repeater on the UV-3R with its short VHF antenna was better than on the Kenwood TH-D72 with its dual band antenna standing in the same place.

Newer versions of the UV-3R including this one now have an S-meter on receive, though it works in coarse steps. I also checked the strong signal handling performance of the receiver the same way I did recently with my other hand-held transceivers. It was on a par with the VX-8GR and the JMT-227, at the poor end of the spectrum.

The transmitted audio is very good, if slightly lower in level than some of the ham rigs. One local said my audio sounded “just like my normal audio.” The LED on the front of  the radio is supposed to glow red on transmit and green when a signal is received. Mine does not glow red, although the S-meter goes full scale to indicate power out. This appears to be a fault, but not one worth sending the radio back to Hong Kong to fix. However, this perhaps tells us something about the level of quality control you can expect for this price.

I have recorded an audio sample off-air, together with one of the Kenwood TH-D72 for comparison:

The earpiece/hands-free mic supplied with the radio is not useful. I had some trouble with the audio but the main problem is that after you press PTT the radio locks in transmit. This appears to be due to RF feedback into the earpiece/mic cable as it doesn’t happen on the low power setting.

Using the supplied VHF antenna I can access from indoors a repeater 50 miles away. Not bad for such a tiny radio running 2 – 3 watts. Several people who have bought the UV-3R have commented favourably on the performance of the supplied single-band antennas. I tested the VHF antenna and found an extremely sharp response curve with a perfect 1:1 SWR at about 143.5MHz. At 145MHz the SWR was 1.5:1. The antenna has a high Q which no doubt accounts for its surprisingly good performance for its size. It’s a pity the resonant point isn’t exactly on 145MHz but that would be difficult to achieve with a mass produced antenna.

It isn’t perfect, but all in all I am pleased with the tiny little Baofeng UV-3R – for the price. However there are indications that where quality is concerned you are getting what you pay for. If I was a UK dealer thinking of importing a batch to sell I’d think twice. I think fussy British consumers would send quite a few back because of niggling faults like the non-working TX indicator or the problem with the headset/mic. But if you don’t mind taking a bit of a gamble on buying a radio from Hong Kong then the UV-3R would be a good bet for £25.

6 Responses to “Baofeng in my shirt pocket”