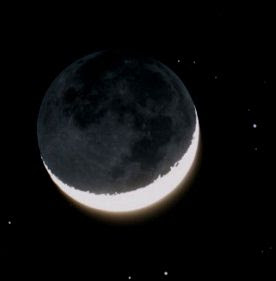 This evening I managed to hear signals bounced off the moon using an FT-817 and an antenna made from a stick and a few bits of wire.

I took the battery out of the clock / weather station to silence its interference and went down to the bottom of the garden with the home made antenna and the FT-817. I couldn’t see the moon this evening as it was cloudy – in fact, attempting to drizzle – but I pointed the beam in the same general direction as last time, turned it vertical to minimize the QRN and started tuning around 432.045MHz. After a minute or so I heard some weak CW.

If I had to give a signal report it would have been 319, the signal was about equal to the noise. Sometimes it would pop up a few dB above the noise for a second or two, and I heard the call KP4AO (though not all in one go), reports being sent, R, 73 and BK, but I couldn’t make out any other calls.

I had the computer interface plugged in to the FT-817 so I brought down the Samsung NC10 netbook which I have been using for my Echolink node and tried to make recordings of what I heard using Sound Recorder in order to listen to them again and even put some samples here. But for some reason when I played them back on my shack PC all I could hear was noise – the CW had all but disappeared. What a disappointment, to have no record of this rare event.

Then, on a sudden stroke of inspiration, I changed my computer sound card settings so that I was using the Realtek internal sound card – normally used for HF digital modes – to play back the audio in place of the cheap USB “dongle” I normally use for computer sound. What a difference! Instead of just hiss with a barely detectable hint that a CW signal might have been there, I now heard the KP4AO signal via the moon just as I heard it live off-air. I have converted a couple of samples to MP3 format without much loss of fidelity so you can hear for yourself what I heard:

The CW certainly is weak but you can pick out letters now and again. If you manage to pick any calls out of those samples then you have better ears than me (which is certainly possible.)

An interesting evening’s experiment. Not just because I heard signals bounced off the moon for the first time ever but also for the unexpected demonstration of how weak signals get lost when you use a cheap sound card. I had been planning on using one of those USB dongles to make my own SignalLink interface. I think it’s back to the drawing board on that one.