My long awaited package from Martin Lynch was finally delivered by UPS on Saturday afternoon and as one reader correctly guessed, it was a new Kenwood TH-D72! I was lucky. The UPS tracking page had been changed to say delivery was rescheduled for Monday, so we went out on Saturday morning. You can imagine how happy I would have been to get home and find a card through the door to say UPS had tried to deliver it! I was pleased to receive the radio and although I did consider wrapping it and putting it under the tree until Christmas Day, the chance of being the first blogger to write about it was too great to resist. 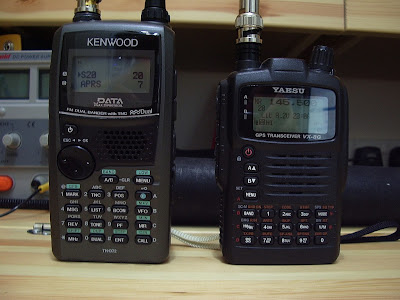 This is not meant to be a review of the Kenwood, more an account of my first impressions of the radio and how it compares with the Yaesu VX-8GR which I have been using for the past few months. The first thing you notice is that the Kenwood is quite a bit bigger than the Yaesu. It’s taller, thicker and heavier. Although I think the Kenwood is nicer looking, the Yaesu feels a bit more rugged and I think its plain black finish would take knocks and scuffs better than the Kenwood’s metallic grey finish. I’ll probably need to get a protective case for it. 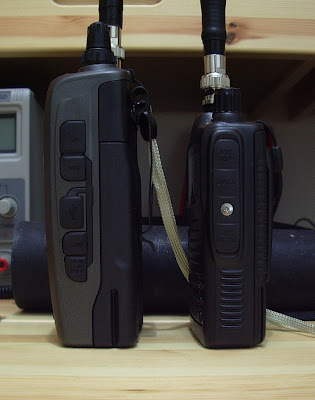 The additional thickness and weight can partly be attributed to the Kenwood’s battery pack which has 1800mAh capacity, compared to the Yaesu’s 1100mAh. This should translate into longer endurance in the field. Yaesu does offer an 1800mAh battery pack for the VX-8 series but it is an optional extra for quite a lot more money. Still, there is no question the slimmer, smaller VX-8GR slips more easily into a pocket for about-town use.

The TH-D72 is a dual band 2m/70cm radio so it it is more directly comparable with the Yaesu VX-8GR than with the tri-band (quad band in the USA) VX-8DR. Both radios have an integral GPS rather than the expensive optional GPS of the VX-8DR which must be fitted to an even more absurdly expensive clunky looking bracket or to a specially made Yaesu speaker mic. (Having said that, the Yaesu GPS options are good value compared to the add-ons for Icom’s D-Star radios – talk about rip-offs.)

The TH-D72 comes with the usual pathetic SMA socket for the antenna and an equally pathetic dual band dummy load, er, I mean whip antenna. The first thing I did, and I mean literally the first thing, was to fit one of my SMA to BNC adapters so I can use any of my collection of BNC whip antennas with the rig. The SMA socket sits deep in a large recess on the top face of the Kenwood, so I was able to use one of the chunky gold plated adapters rather than the slimmer black one that I use on the VX-8GR.

I checked with a piece of paper to see if the adapter tightened all the way down to the body of the radio, which is essential to avoid the risk of snapping the SMA at the first accidental knock. It didn’t, so I added a steel washer to fill the gap. I covered the knurled base of the adapter with a layer of self amalgamating tape to hide the gold finish and once an antenna is fitted you wouldn’t know that the BNC socket was not standard equipment. Why couldn’t the manufacturers fit one in the first place? By the way, neither of these radios come with a wrist strap – the ones shown in the picture were salvaged from old mobile phones in the junk box.

One of the main reasons I decided to get the Kenwood TH-D72 even though I had the VX-8GR was that I was very unhappy with the performance of the Yaesu’s GPS which is slow to acquire a fix and usually can’t manage it at all from inside the house. I found this a real nuisance as often I just could not be bothered to hang around waiting for it, while the chance of acquiring a fix once you are on the move is even worse. As you can see from the picture above, the Kenwood has got my position while sitting on the bench being photographed while the Yaesu’s GPS screen was (and remained) blank. 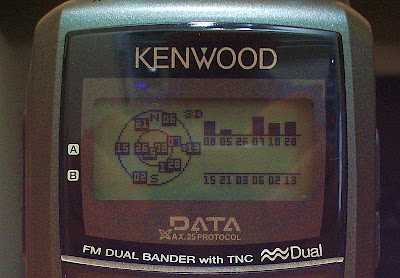 The Kenwood has a display to show how many GPS satellites it is receiving and as you can see from the picture above, even on the bench it does quite well. This is a nice screen to have, but with this exception I prefer the Yaesu VX-8 display which shows more information at a glance. The Kenwood display often consists of a couple of short lines of text and you have to page through several screens to get all the information. However I do like that the Kenwood position screen shows the grid locator square – the Yaesu doesn’t.

The TH-D72 has the ability to plot your track and store it in memory – not something I can see myself using though. What I do consider very useful is the ability to enter and store the co-ordinates of several locations or waypoints. You can then select one and one of the Position pages will display your distance and bearing from it. This will be very useful during WOTA operating as I will be able to enter the exact co-ordinates of the summits I intend to visit, eliminating the difficulty sometimes experienced of identifying the summit on the ground!

The TH-D72 is virtually a hand held TM-D710. It has almost the same functionality of its bigger mobile brother, in fact more: it supports the Kenwood Sky Command remote control system which my European D710 doesn’t. A pity – it would have been fun to see if I could have used it to remote control my Elecraft K3, which uses a command set similar to the TS2000.

In common with the D710 the D72 has hierarchical menus. Personally I prefer the menu system of the VX-8 series, which has just two linear menus, one for radio settings and one for APRS. I know where the ones I most often use are and can quickly zip to them using the rotary control. The Kenwood menus require a lot of clicking with the four way directional button thingy.

If you want to connect your VX-8 to a PC for memory management you need to purchase third party memory management software and an interface cable. Kenwood provides the memory management software free and the TH-D72 has a USB port which can be connected to your computer using a provided, but in any case standard, USB cable – a significant saving. Through this cable you can not only manage the memories you can also edit all the radio’s settings and access the built-in packet TNC. This appears to be completely compatible with the one in the TM-D710. I just changed the COM port number and APRSIS32 as set up for the D710 was immediately able to use the D72 instead. A menu option allows the internal GPS data to be output over the same serial connection. I haven’t experimented with this, so I don’t know if this can be done at the same time as accessing the TNC or whether APRSIS32 would be able to take advantage of it.

Hopefully the TH-D72 will, like the D710 (and unlike the Yaesu radios) be software upgradeable. I discovered, to my disappointment, that my APRS repeater objects being transmitted by my G4ILO gateway were displayed by the VX-8GR but not by the Kenwood. The packets were received but were apparently considered to be invalid. A bit of research by Kai Gunter, LA3QMA led to the conclusion that this is a bug, not just in the TH-D72 firmware but in the TM-D710 as well, as the same objects were displayed by older model Kenwoods. The problem is apparently caused by the time-stamp in the objects created by APRSIS32 which is in local time (ending in ‘h’) instead of zulu time (ending in ‘z’.) The objects are correct according to the APRS spec, so the Kenwood should display them.

The TH-D72 is full duplex. That is, it can receive on 70cm while transmitting on 2m or vice versa. There are very few current model radios that can do this, one of which (the Alinco DJ-G7) doesn’t do it very well as 70cm is severely desensed by the 2m transmission. This would make it a good choice for FM satellite operation allowing you to hear your own signal. One of these days I will try this, I just need to get round to making a suitable dual band antenna.

Another neat feature of the TH-D72  is the nine EchoLink memories. This allows the radio to store the DTMF sequence needed to connect to up to nine different conferences or nodes so you can recall them by name and transmit them to your local EchoLink repeater. If you use EchoLink it is a real boon as I can never remember node numbers – heck, I still can’t remember my mobile phone number!

The Kenwood TH-D72 is quite an amazing radio packing an incredible number of features into its small form factor. However I would not go so far as to say it is a better radio than the VX-8GR. There are things I like and things I dislike about each of them.

In the UK, the VX-8GR is being sold for quite a bit less than the TH-D72, even at the discounted price I got from Martin Lynch. If you don’t want to connect the radio to APRS software on a PC, aren’t bothered about getting your GPS position indoors and never use EchoLink then you probably won’t think the Kenwood is worth the extra money. Though it does include a higher capacity battery as standard and if you want memory management software then both this and the connecting cable will cost you extra for the Yaesu.