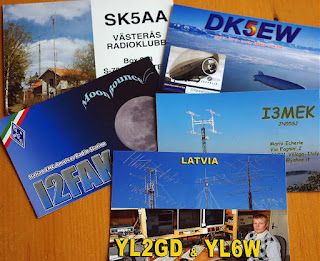 With several QSL's from last month's EME action now arriving, April's 'best days' have just concluded. For me, operating with no antenna elevation, 'best days' mean those with northern-most lunar declinations (these put the moon rising clearly and almost directly out in front of the house, not in the neighbour's trees); not having the moon near the sun and also, having the moon closer to perigee (closest approach to earth) rather than apogee (furthest from earth). With just a single 9 element yagi, every db is precious.

A website that helps determine when these good days occur, is the Making More Miles On VHF eme page. A graphical display of several important elements will easily determine which days might be best to operate ...

... but I have also found success on days that don't look particularly great, with the moon approaching apogee and it's subsequent higher db path loss. As with most radio propagation, there is also some magic involved and, just like on any band, some days are simply 'better' and for no obvious reason.

This month saw six EME contacts, some with stations worked previously, in 2007, and not 'new uniques', while three were new, bringing my uniques total to 73, with this small, horizon-gain assisted system.

As summer approaches, it will be interesting to see how favorable the above mentioned variables will come into play as many of the best northerly declination days will also closely follow the sun and its increased background skynoise ... not so much a problem for me but for those bigger stations trying to hear a very weak signal in a noisier sky.
Steve McDonald, VE7SL, is a regular contributor to AmateurRadio.com and writes from British Columbia, Canada. Contact him at [email protected].