I finally received a letter from the Clark Creek Ranger District regarding my encounter on Mt. Evans (read the first part of the story if you are not familiar with it). It took me almost six weeks and several e-mails to get an official statement from the Ranger District. I guess an underfunded federal agency has more pressing issues to deal with.

The good news is that it was an over-eager FS employee who kicked me off the mountain.

The bad news is that, according to the letter, the Federal Code of Regulation [36 CFR 261.10(a)], which applies to communication equipment, is written with some built-in ambiguity and might be interpreted differently in other Forest Service units. 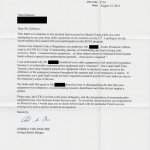 Well, I will deal with another interpretation if and when I run into another issue. The Clear Creek Ranger District interpretation however makes sense to me – chapter closed!
I really appreciate the clarification.

Read the entire letter by clicking on the thumbnail to the right.

That’s my last post from Mt Evans but there are two more pictures I wanted to share. The first one was shot at the Summit Lake trail-head early in the morning. The trail starts on the right side of the picture, goes up the ridge to Mt. Spalding and over to Mt. Evans.

Panorama of the Mt. Evans Area 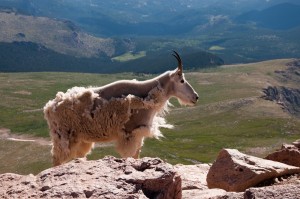 The second picture is from a close encounter of the third kind… well, not quite but is was remarkable. This unflinching mountain goat approached me. The picture is shot with a 52mm lens, not a tele-photo lens. He came up to me at arms lengh… too close for my taste. I normally try to keep a save distance between wild animals and myself, but this guy was not shy at all. Since I had never heard about occurrences of rabies in mountain goats and since I received some goat combat lessons earlier in the year (courtesy of Rooster) on my trip to Mt. Herman, I took the chance to take some real close-up shots instead of retreating.

Matt Schnizer, KØMOS, is a special contributor to AmateurRadio.com and writes from Colorado, USA. Contact him at k0mos at schnizer.com.

One Response to “Antenna Restrictions on Mt. Evans? The Conclusion”