This blog first appeared in February 2016 but is just as relevant today as it was then!


I admit it. I have an extraordinarily kind next door neighbour!

Ever since erecting a new, much bigger LF antenna several years ago, she has allowed me to run its large, three-wire 100' tophat, directly over the top of her house to a tree on the far edge of her property. As well, she removed her only light dimmer, knowing that it was creating a LOT of nasty RF 'hash' throughout the LF / MF spectrum, seriously degrading my LF reception. To hear the RF noise-signature of a typical light dimmer, listen here, on the ARRL's helpful page of 'household' RFI recordings ... that's just how it sounded here as well!

She recently did a major renovation, which included a new multi-light dining-room fixture and expressed to me a desire to be able to dim it ... oh-oh, I was definitely not looking forward to this.

I did a little web-research and soon learned that some of the most RF-quiet dimmers were being produced by Lutron. One model in particular, claimed to pay special attention to RF noise-filtering and that was the "Centurion", whose smallest model is a 600 watt-capable unit, with a large finned heatsink front plate ... model #C-600P-WH.

I decided to order one from the only dealer I could find in Vancouver that seemed to carry this line of dimmers. The cost was just a little over $40 Canadian (sells for about $25 in the U.S.A.) ... cheap enough if it would do the job! 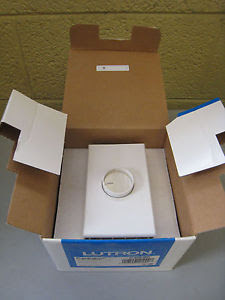 When the unit came in, I picked it up on my next ferry trip to the city and upon my return, installed it the following afternoon. Before doing the installation, I fired-up the receiving system, tuned to 300kHz, and with the baby monitor set up beside the speaker, took the portable monitor with me.

After installing the new dimmer, I turned on the baby monitor, held my breath ... and turned on the light fixture. Wow ... not a trace of hash could be heard! Adjusting the dimmer from high to low produced no difference in the noise level. I later did a more thorough bandscan and could find no evidence of RFI, on any frequency. The only RFI that I could detect was when placing my Sony ICF-2010 close to the actual dimmer. I was unable to detect any noise further than 6" away from the lights or the dimmer!

So it seems that this model can be highly recommended, for your own home or if you have a next door neighbour 'light-dimmer problem'.
Steve McDonald, VE7SL, is a regular contributor to AmateurRadio.com and writes from British Columbia, Canada. Contact him at [email protected].

3 Responses to “An RF-Quiet Light Dimmer”