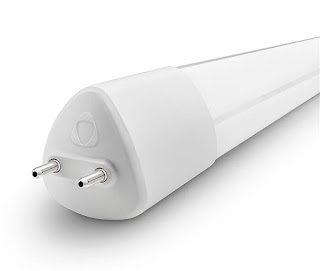 I recently had the fluorescent bulb in one section of the under-cabinet kitchen counter lighting fixture go dark. This wasn’t too surprising as the 24” bulb had been in place since the house was built in 1990!

I purchased the replacement bulb only to find out that it was not the bulb but rather the ballast transformer that had failed.
A search for a suitable ballast replacement turned into a quick education when I learned that these things were quickly disappearing, with many models no longer even being manufactured. Another solution would have to be found and it appeared that fluorescents were bring replaced with, what else ... LED fixtures!
Offering similar brightness and colors as traditional fluorescent fixtures, the LED bulbs came in two basic styles.
One type lets you just pop-in a new LED ballast-compatible bulb and away you go. This is convenient but still wastes energy in the ballast and eventually would require an even harder to find ballast.
The second type is a directly-wired LED replacement, not relying on the ballast transformer at all. Having its own built-in switching power supply, these bulbs connect directly to the 120V AC line normally going to the ballast. It’s a very simple task to snip the 120V AC leads from the faulty ballast and connect them to one end of the bulb’s socket. Now totally disconnected, the original ballast can be left in place as is.
The entire fix took less than 30 minutes ... but how much noise or crud would the switching supply produce in the RF spectrum?
Crossing my fingers, I turned the light 'on' as well as my portable Sony ICF-2010 shortwave receiver. I could hear no noise coming from the radio. I could only detect some RF hash when I put the Sony (with its built-in ferrite bar antenna) right beside the fixture! This was good news and its quiet footprint was confirmed later, out in the shack, with radios connected to much larger antennas.
The bulb I used was a ‘toggled’ product, designed and engineered in Detroit , but I suspect is manufactured, like so many other LED devices, in China. The bulbs are sold in Canada and in the U.S. by Home Depot and possibly others.

If you’re looking for a radio-friendly fluorescent replacement or update, I have no hesitation in recommending these directly-wired LED bulbs from ‘toggled’.
And, if you’re also looking for a ham-friendly light-dimmer, see my previous blog on my own hunt for a noisy next-door neighbour.
Steve McDonald, VE7SL, is a regular contributor to AmateurRadio.com and writes from British Columbia, Canada. Contact him at [email protected].