I don't recall where I first read about the Angry Nine, but it captured my imagination.  I read everything I could find about them and decided it would be great fun to operate such an antique on the ham bands.   There is no logical reason to desire such a QRP radio.  The low power output on CW is indeed, 5 watts and high power is a pileup busting 15 watts.   The AM transmission are 1 watt and 7 watts respectively.  That's almost QRPp for AM mode.
I'd had some experience restoring old tube equipment; my Heathkit HW-101, Knightkits VFO and Hallicrafters keyer, and I figured I'd take the next plunge and learn to use a receiver-transmitter combination and see how mobile high-voltage power worked from Vibrators and Dynamotors.
These radios seemed to have been more plentiful in the surplus market 10 - 20 years ago.  Now you'll occasionally see one come up on eBay or other sites, but often times they are in very rough shape or the they are foreign language versions.  I bid on a few auctions over the past couple of years and the bidding always exceeded my threshold for what I thought it was worth.  The one above was part of an auction from an individual who had actually trained on these units prior to deploying to Vietnam.  Later in life he became interested in finding one and spent time in military surplus warehouses going through pallets of equipment to find one in good shape.  This particular unit is made up of a Lewt manufactured transmitter and a Telefunken receiver.  The original owner preferred the receiver characteristics of the Telefunken over the Lewt manufactured model, so he paired the two.
Many of these old units are radioactive, due to the radium paint used on the front panels to make the lettering glow in the dark.  This particular unit is off the lower scale on the Geiger counter and must be handled with care.  Basically, I have to be careful to not touch my face with my hands after operating the unit and wash my hands thoroughly.  Radium emits Alpha particles, which are not especially strong but the resultant radioactive dust from the front panel shouldn't be breathed or ingested.
The AN/GRC-9 is a set of components primarily comprised of the RT-77/GRC-9 receiver-transmitter, capable of operating between 2-12 MHz in CW, MCW and AM modes.  MCW is a modulated form of CW that can be received by radios that do not have a BFO (i.e. a normal AM receiver).
It is a mid to late 1940's design and was first documented field use in the Korean War, and was in active use through the Vietnam War and continued to be maintained in US military warehouses until 1974.  It was in use by other nations long after, most notably the Dutch military.

Power on the move

Designed to be used in the field, both vehicle mounted and carried by mobile infantry; there were a number of ways to supply power to the unit.  There were a few different Vibrator/Dynamotor units, that could operate from common DC voltages of the time (6v, 12v, 24v) as well as a hand cranked, field portable generator.
Keep in mind that the state of the art at the time of its design used vacuum tube technology and in the case of the RT/77-GRC/9 it required the following voltages:

That's a tall order for mobile and portable power supplies but designers in the 1940's were quite clever in packing power supply units.   I managed to obtain both the hand cranked GN-58 generator with the base chassis and seat for portable operations, and a DY-88 for fixed / mobile operations.

I supply the DY-88 from either an RV battery or an amateur 12v power supply.  When in Standby the DY-88 draws less than 1 amp, but placing the radio in Send mode switches on the Dynamotor which draws 12 amps @12v, without key-down and up to 14 amps on high-output key-down.  It will drain an RV battery pretty quickly at that rate if the radio is left in Send mode, and works an amateur power supply pretty hard as well.  So don't expect to operate remote off a battery alone for too long if your having lengthy QSOs.  An added benefit of the DY-88 is that when the enclosed Dynamotor is running you'll have a nice extra 85 dB of generator noise to accompany your listening pleasure.


The GN-58 is a tough workout since it has to be cranked by hand at 60 rpm continuously.  Obviously, you need a partner unless you can figure out how to crank it with your feet while sending CW. You will also want that partner to help you carry the GN-58, and the accompanying accessory bag for the chassis and seat.  IT'S HEAVY.  I haven't weighed everything, but according to the manual that came with the set, the radio / generator / accessories including antennas comes out around 120 lbs.

The radio itself has a carry bag, as well as a bag for the GN-58 legs and seat, the vertical antenna, and miscellaneous.
There's another bag (shown above) for carrying power supply cables, keys, hand mic, long wire and doublet antennas, external speaker, torture device headphones, torture device in-ear phones, as well as a box of spare tubes for the radio.
If you're traveling in a squad sized group, then many hands make light work, otherwise you're going to be making a lot of trips hauling your QRP rig up the hill.

These Western Electric headphones clamp tightly over your ears sealing out QRM and squeezing your head like a vice.  After 10 minutes I was confessing to sins I'd never committed. 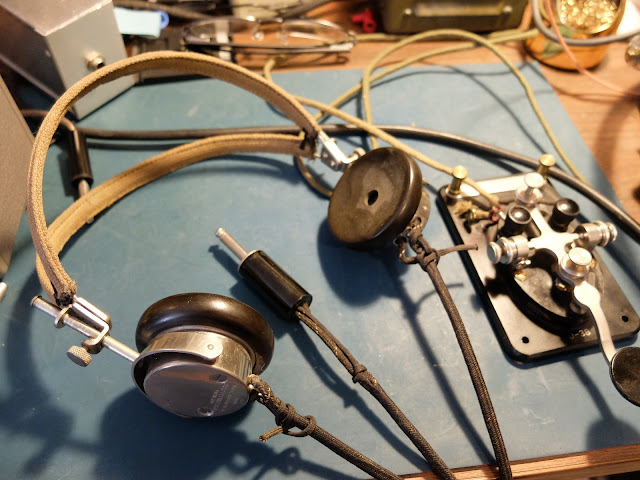 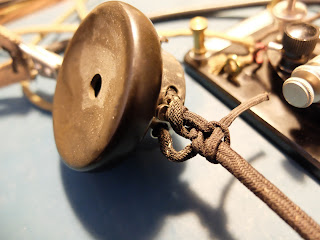 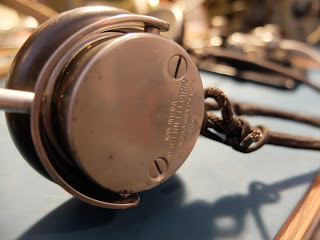 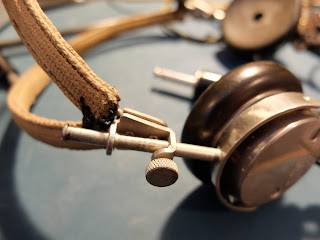 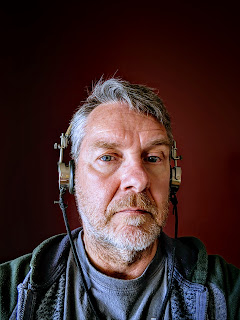 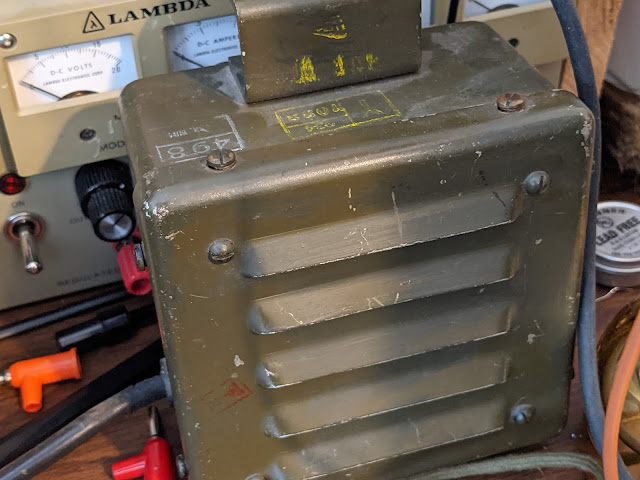 The external speaker is a rugged, high impedance device (4k Ohms), that after all these years can still output audio at high volumes without distortion.  It has a built in thumbscrew clamp that allows it to be attached to vertical or horizontal objects.
Alternately, the thumbscrew can be used in combination with the vice-like headphones to extract information from a prisoner.

The AN/GRC-9 comes with 3 antenna systems; a multiple section, whip vertical for quick field setup and mobile use, a long wire that can be quickly deployed in a fixed station as a sloper, and a doublet for best reception, transmission in a fixed location. 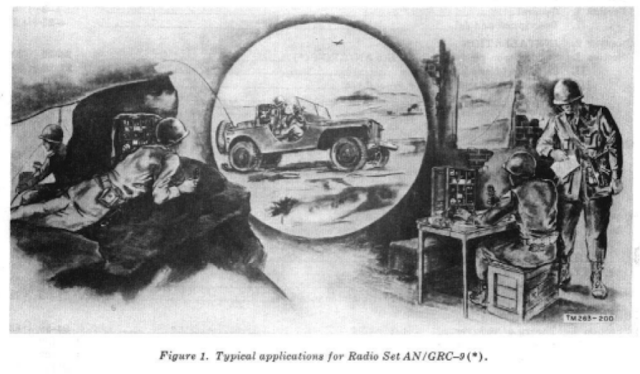 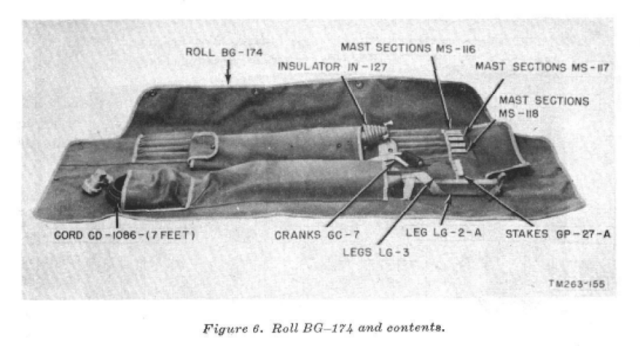 For testing purposes I have my radio hooked up to my 80m Windom, which it tunes very nicely on 80m, 60m, 40m and 10m bands.
When the weather warms a bit I will be taking the radio out for some portable use and I'll try it out with the antennas that are part of the AN/GRC-9 set.

As a military radio, it was expected that repairs should be performed in the field when possible.  The radio shipped with spare tubes for the receiver-transmitter, as well as spare tubes and vibrators for the DY-88 power supply. 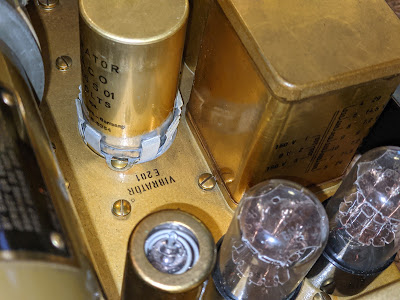 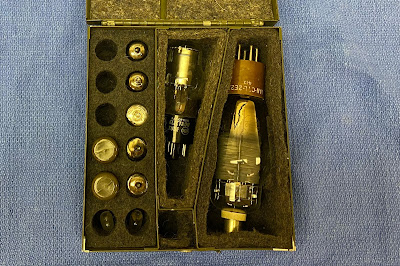 In the few days I've had the AN/GRC-9 the only problems I've encountered have been related to the old DY-88 power supply.  Old vibrators cans are generally seized up, as was the case with mine.  Eventually mine became un-stuck after repeated applications of power but there are some methods to restore truly frozen ones using AC current and light bulbs (see Notes section below).
I've made about half a dozen contacts on the ham bands, including a 40m contact to a station in TX which is kinda DX for my locale.  I've received nice signal reports.  I've specifically asked stations about my "chirp" during QSOs and they've reported it as "not bad" and "charming".  When operating from the VFO (master oscillator) rather than a crystal, the GRC-9 will "chirp". It was considered an acceptable design trade-off at the time.  I've listened to the transmitter from a remote WebSDR station to hear the chirp for myself, and I agree that it isn't extreme and lends some character to the station.  The unit does drift about 200 Hz during a QSO which I also think is quite acceptable for it's age.  It's possible that if I spent more time in Send mode prior to a QSO to allow the transmitter tubes to warm up the drift might be lessened, but keeping the radio in Send mode puts quite a load on the power supply (both the 12v supplying the DY-88 and the human cranking the GN-58).
The RT-77 Telefunken receiver doesn't offer much in terms of selectivity and on a crowded band there's a lot of stations to contend with in the passband.  The outboard CW filter deals with this nicely, but it is so narrow that when shifting from Send to Standby, the resulting frequency shift often throws the station I'm receiving out of the filter's passband, so that's a bit tricky.
The receiver's tuning knob also is very coarse, in that fine adjustments are made by breathing on the knob.  However it has zero backlash, which is amazing in a piece of equipment this old.  The markings on the receiver are in 50 kHz intervals so the only way to really figure out where you are is to look at RBN for your spot.

Enjoy the pictures of the AN/GRC-9 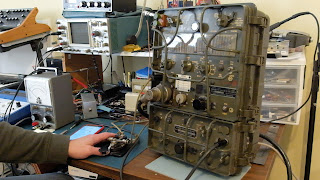 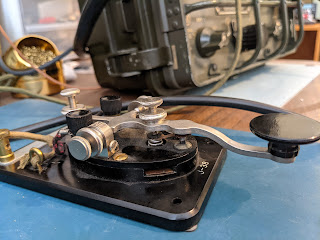 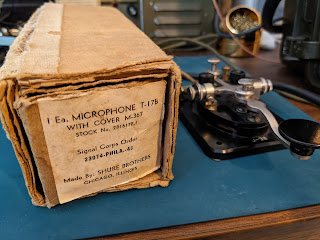 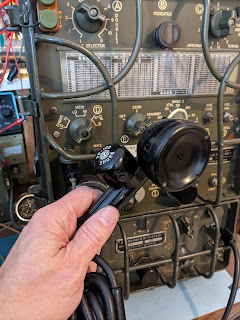 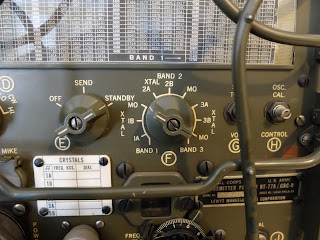 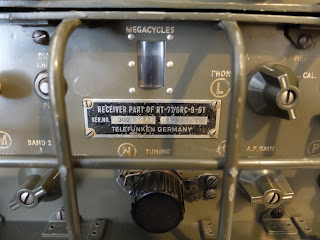 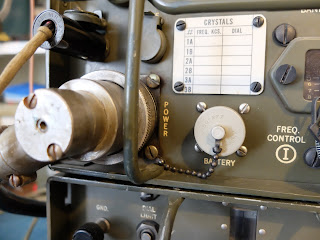 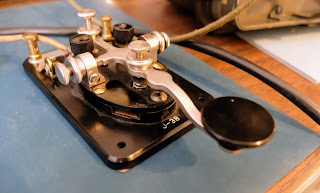 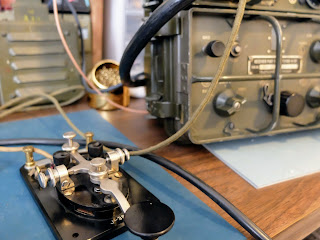 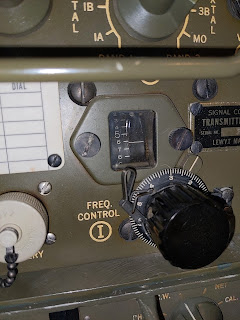 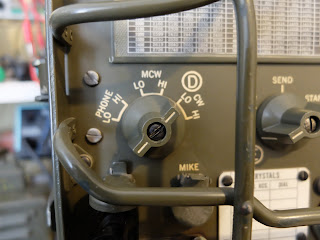 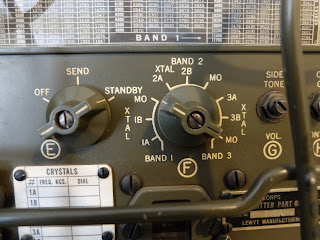 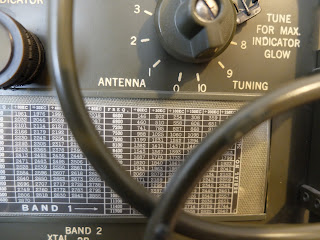 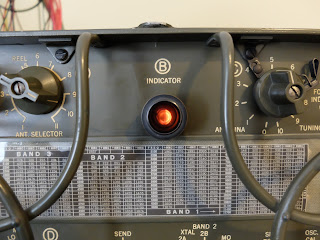 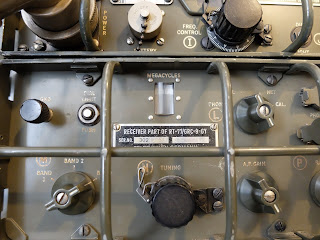 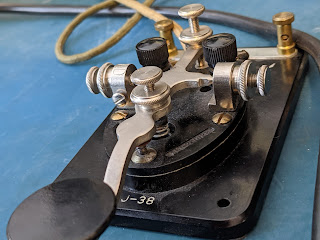 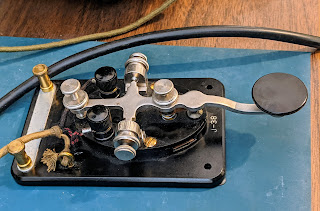 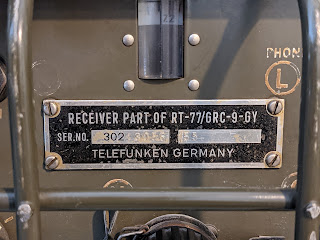 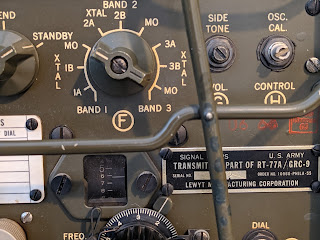 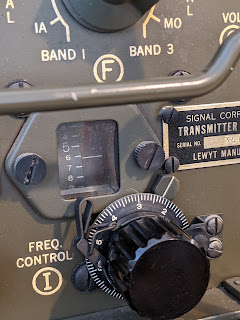