If you’ve used Google Maps then you have probably tried the Street View feature that lets you look around a place on the map as if you were actually there. Unless you are in Germany, that is. Germany remains the largest European country that is not covered by the Street View service. The German government has forced Google to offer an opt out service that allows people to request that their houses are blurred out of the pictures in the same way faces and vehicle registration plates are. Some privacy campaigners in Germany would prefer that appearing in Street View should be an opt-in feature. 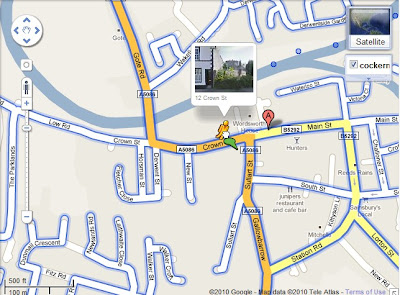 Street View has been available as an option on the aprs.fi APRS tracking site for a few months now. It’s fun to virtually travel along with an APRS user and see what they see. But Street View has a serious use too. If you’re house hunting then it would be a great way to see whether you like the neighbourhood, for example. When Olga and I went to Prague last month the taxi driver from the airport wasn’t sure exactly where our rented apartment was but because I’d “visited” the area in Street View a few days earlier I recognized where we were and was able to direct him right to the door. (Incidentally the Czech government has also called a halt to further data collection in the Czech Republic pending talks with Google.)

I don’t know what people think they are achieving by insisting on being able to opt out of Street View. It shows nothing that you can’t see just by being there. What are they trying to hide? Anyone can take pictures of an area, upload them to the internet (without blurring anyone’s face or vehicle registration number) and link them in a way that anyone searching for pictures of that place will find them. All Google has done is go about it in a more methodical way. Are we going to have controls on publishing photos on the internet now?