A Summer Trip to Greenland 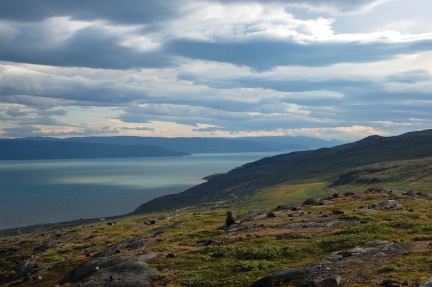 A professional colleague who is the principal investigator of the Sondrestrom incoherent scatter radar facility announced at a conference that they no longer had a scientific high-rate GPS receiver at the site for making ionospheric measurements.  I enthusiastically volunteered to ship them one that I had on the shelf.  She suggested that instead I should come install it myself and I found some support to do it (the National Science Foundation heavily subsidizes U.S. Greenland and Antarctic scientific travel during their respective summers, making this trip possible).  Therefore unlike my previous trip in the winter, this trip did not involve travel with the most perverse of arrangements flying to Copenhagen only to hop on another plane and fly half-way back to the States.  I set off for my second trip to Greenland, leaving Scotia, NY, early on Monday and returning mid-day on Friday.

On the past trip, conditions were really awful for radio with plenty of visible Aurora.  I didn’t really mind that because the auroras were beautiful, but with only a small chance of NLC/PMC (noctilucent/polar mesospheric cloud) sighting in the summer, I was eager for some good radio conditions to sate my appetite for other nerdy activities.  I set up the radio equipment almost right away the first evening to make sure that everything tuned up and immediately made 10 or so QSOs on 20-meter CW before heading to bed.

Instrument installation is always a hairy business, especially when you can’t just run to a hardware store, let alone going to RadioShack or calling McMaster-Carr.  Sometimes, everything works smoothly; other times it doesn’t.  In any case a flexible attitude (and some good old ham practicality) goes a long way.  Wind gusts of 40-50 mph (18-22 m/s) on top of the hill made for exciting work, but having a couple of helpers made it go smoothly.  Here is a photograph of the installed instrument on its hilltop (the box and green antenna on the right-hand side of the pole, which also held a weather station). 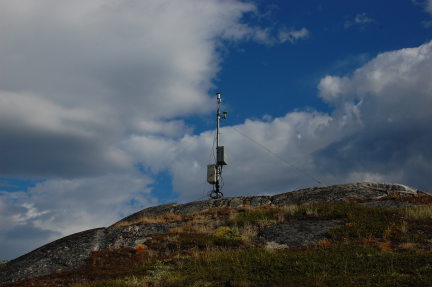 Work, especially some recalcitrant Windows 7 issues (At one point, I was running Windows 7 in a VirtualBox virtual machine on a Linux machine and logging into the Linux machine from a Mac!), kept me pretty busy on Tuesday and Wednesday and I only managed a few minutes of operating on each of those days.  But, by Thursday, my schedule broke loose a little and I was able to operate for a few solid hours in the afternoon and evening.  I had no idea that Greenland would be so popular on 30 meters!  Wow.  That’s definitely the most intense pileup I’ve ever experienced.  Thanks for being patient.

There was some about S3 hash on 20 and 30 meters that the K3′s NR function would take care of but the NB function wouldn’t.  NR is not good for running pileups, so I often had to get the caller isolated to use NR.  On the receiving end, there was a lot of fast QSB, with a period of a few seconds (this is consistent with magnetospheric and plasmaspheric waves that impinge upon the auroral and subauroral regions.)  In any case, callers were up and down, often in the span of a call.  You all on the other end may or may not have observed the same from me.

Per usual, the setup was an Elecraft K3 and the GU Special vertical with 2x 1/4-wavelength radials for each of 20 and 15 meters.  Everything else was tuned by adjusting the length of the radiating section.  This is a substantial improvement in performance-to-size ratio over the previous station I carried in January 2012, which was a Yaesu FT-840, DK9SQ 10-meter telescoping pole, and a variety of wire antennas.  Below is a photograph of the GU Special deployed (it’s in the center, unceremoniously ty-wrapped to a wooden sign post sticking out of a barrel).  The diesel Toyota HiLux pickups are the most popular vehicle in town.  We gave a visiting graduate student lessons in driving a manual transmission.  Great vehicle to teach/learn on with lots of torque and low gearing! 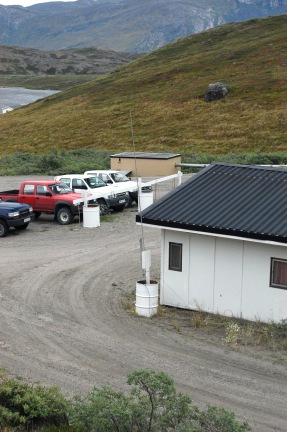 Although I was unable to connect with them, we did drive past the OX2A/XP1AB site on Black Ridge that overlooks downtown Kangerlussuaq: 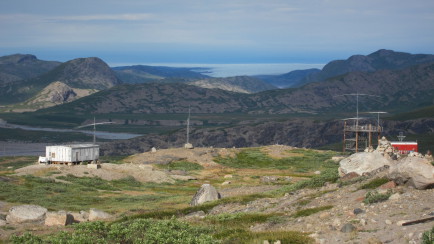 Thanks for the QSOs.  The log has been uploaded to LoTW this morning and QSL cards are ordered.  I never ordered cards after the last trip, so it will be a shared card with a photograph of the aurora.

One Response to “A Summer Trip to Greenland”