19 February 2012 | by Tim G4VXE  |  Share |  Tweet |  Leave a Comment (1)
I’d had the chance to play with one of the Baofeng UV-3Rs a few weeks ago and quite liked it. Like most people, I’d seen them advertised in the UK amateur radio press at around £50. On e-bay you can get them for £20 plus £10 postage. I thought I’d plump for one of those and see what happened.
The radio arrived in about 8 days from ‘RadioBanker’ in Hong Kong, beaufifully packaged and with some nice stamps! It was neatly boxed and pleasingly presented. The box includes the transceiver, the battery, VHF antenna and UHF antennas , power charger and leads as well as an earpiece and microphone. Assembly was straightforward and just required the battery to be clipped into the body of the transceiver and the cover slid down and clipped in place. I’d opted for the jaunty blue model! 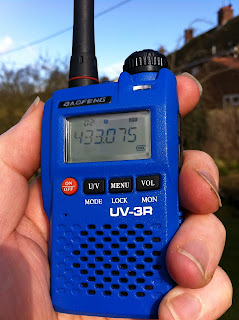