A New Country and Some 2m Es 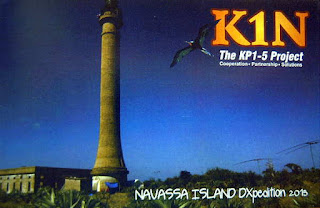 The summer propagation doldrums, as well as my roof reshingling projects, received a short respite this week with the arrival of a new DXCC QSL for 160m. The K1N card (Navassa Island Expedition) was received for my CW QSO this past winter. The card brought my 160m DXCC total to 155 worked and confirmed while adding one more to my overall all-band total of 336 / 336.

Sunday afternoon brought a rare and welcome 2m sporadic-E opening. Signals on 6m towards Colorado quickly rose from a normal 'S9' to ear-shattering S9 + 30-40db with one signal putting the S-meter of my IC-756PROIII hard against the right pin and completely blanking the bandscope's lower regions ... I have only seen this happen once before, when beaming semi-local VE7XF while he is running high-power.

I immediately activated my Es MUF receiver (Icom R-7000), tuned to an empty FM frequency and squelched. Not long after, the squelch broke with a strong signal also from Colorado and several more throughout the band. It is difficult to ID FM signals as they rarely identify except at the top of the hour.

After several CQ's on 144.200 (9el yagi and 150 watts) aimed to the SE, W9RM in Colorado popped-up briefly with an S9 signal and was quickly worked before he faded. Unfortunately, either due to lack of activity or fast-deteriorating conditions, his was the only signal heard. In terms of 'quality' of the opening, it was poor, but any 2m Es is always exciting.

I once had a two-hour 2m Es opening to southern California and worked 32 Californians on 2m SSB before conditions faded ... it would be nice to see that once again. One of the fellows I worked that night had just set up his new 2m transceiver and, not being familiar with 2m propagation, told me 'I'll look for you again tomorrow night'. I told him that he could look for me for the next 20 years and he'd likely not hear me ... that opening was 32 years ago!

Let's hope we get some more 2m Es before the season ends as it is one of the most exciting propagation experiences there is.
Steve McDonald, VE7SL, is a regular contributor to AmateurRadio.com and writes from British Columbia, Canada. Contact him at [email protected].

2 Responses to “A New Country and Some 2m Es”