One of the Broadcast Band’s (BCB) six ‘graveyard’ frequencies is 1240 KHz.

The origin of this spooky name is often a source of debate. Some suggest that it comes from the cacophony of strange howls and sounds that can be heard on these frequencies at night, as multiple fading signals fight it out to be heard, while others relate it to the similarity of the jam-packed headstones in a typical graveyard. Whatever the true reason, it's a fascinating part of the BCB to explore.

Most BCB DXers enjoy the challenge of tackling the graveyard frequencies as they're often so busy. New stations will fade in for a brief period only to be replaced by a totally different one a few moments later ... and then a different one soon after. It gets even better if the fade-ups coincide with a local ad or a ‘top-of-hour’ ID, putting a new catch in the log!

Several days ago I reactivated my 10’ x 20’ loop and Wellbrook ALA100N preamp, that I use for NDB and BCB DXing, by adding a new buried coax line from the shack. 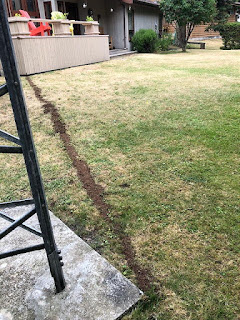 I had previously re-appropriated the loop’s coax for a nearby HF wire antenna and had been without the loop all winter.


After BCB DXer Mike Cherry (VE7SKA) on Salt Spring Island, the next island to the west of me, described some of the European action that he had experienced last winter, I am determined to not miss out during the next winter's BCB DX season!

Once getting the loop powered-up in mid-afternoon, I decided to give it a test by making a ‘deep-search’ on 1240 KHz.

At 1500 hours local time, I wasn’t hearing any audio on 1240 but a weak carrier could be detected audibly. Using my Perseus SDR’s waterfall in its narrowest possible window, produces an extremely narrow passband, effectively increasing the sensitivity by a huge factor. This allows the waterfall to display weak signals that are presently being propagated to my location but far too weak to be heard by ear. I’m estimating that in this narrow bandwidth, it can dig about 30 dB or more into the noise, but there is a price to be paid for this extra gain .... time!

If you're used to watching your receiver’s waterfall scroll along quickly, this mode is just the opposite. It moves in very slow increments, allowing the weaker signals to build up enough to be visible before taking the next deep look. The screen capture shown below is a result of a three-hour listening period, from 1500-1800 hours local time. The entire waterfall is 25 Hz wide, with each tick representing 1Hz.


Although no signals were clearly audible during this period, my deep-search revealed the carriers of ~28 different stations being received here in south-west British Columbia ... in the middle of a summer afternoon! It’s interesting to note that few of these signals are 100% stable and several can be seen really struggling to maintain their exact assigned frequency. In this highly narrow bandwidth view, even the worst drift amounts to no more than a Hertz, well within the required tolerance of +/- 20Hz.

Using the always-reliable MWLIST, the locations of the most likely candidates for these 28 signals are plotted below. These are the 28 nearest stations and with my loop pointing east, a definite east / south-east flavour is evident. 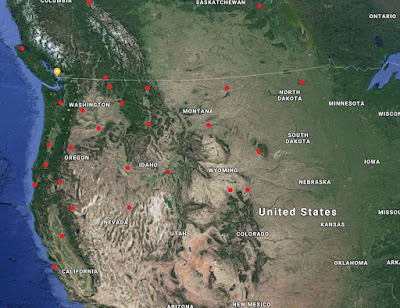 At mid afternoon, one might expect to see only groundwave-propagated signals on the broadcast band. Midday groundwave on the broadcast band can easily travel a few hundred kilometers, gradually growing weaker over the longer paths. Perhaps all of these signals are arriving via this mode as they are at least 20-30dB into the noise. I initially thought that some of the further-out signals were being reflected from a strong daytime D-layer, although most of the energy would be absorbed. Further reading shows detectable groundwave up to 1200km is possible which coincides nicely with the distances observed. Most likely what I'm seeing is a combination of extended groundwave and D-layer refraction on the furthest signals.

The second screen capture shows the same frequency for another three hours, starting about an hour before local sunset. Some of the weaker signals seen earlier now begin to grow in strength as the D-later absorption starts to decay and reveal the higher E-layer. By the end of the third hour, an additional 41 stations have appeared for a total of 69 carriers cantered on 1240 KHz. (note that my Perseus calibration is off by a few Hz)


The next 41 closest stations are now plotted below in yellow, showing the most likely source of these signals. The distances illustrated are in-line with single and double-hop E-layer or possibly lower F-layer refraction. 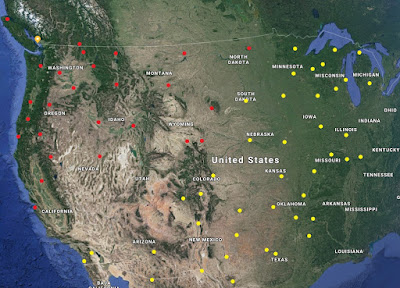 This view shows the directional pattern of the front of the loop while pointing east, with its very broad circular lobe. In this direction, the narrow null is only seen along the coast. It will be interesting to do a mid-winter follow-up on 1240 and compare the present summer propagation to the much better winter conditions. I expect that a some point, propagation via the higher F-layer will be present and extend skip distances out to the east coast or to South America.

In the meantime, things are almost ready for some pre-sunrise looks to the west and some overnight top-of-hour recordings ... as soon as I re-calibrate Perseus!