You can never please all the people all of the time! We all know the truth of that statement. I thought the programme for this year’s RSGB convention was a particularly strong one. But talking to a friend at lunchtime, he felt it was a weak one! a couple of people mentioned the lack of any contesting content, other than the trophy presentations!

The best day for me to attend was Sunday, immediately meaning that I couldn’t see GW8JLY’s Meteor Scattter and YO4FNG’s VHF DX presentations, both of which I would have loved to have seen, but they were Saturday only.

I arrived on Sunday morning and found my way to the room where Graham G0NBD was presenting on the 472khz band. Given my experiments I was interested to hear how it was being done ‘properly’. Graham’s presentation was fascinated and I came away with a few ideas. An interesting snippet was that apparently, in addition to the IC706 working on 472khz, so does the old IC735 – up to about 25 W of output! 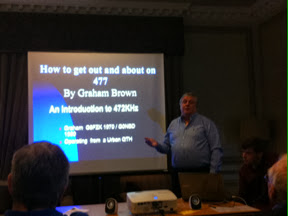 There were also some interesting uses for the RTLSDR dongles and making them work much lower in frequency. I need to have a look at that!

I would have loved to have had more time to hear about propagation on the band, but Graham filled 45 minutes very easily and capably.

Next I headed over to hear half of the OFCOM update, presented by Paul Jarvis and Ash Gohil. I was impressed with what I saw and felt they did a good job, with a generally good natured, but challenging audience! There were some in the audience who seemed specialised in making issues where no issues existed! However, it was an interesting session and gave a flavour for the nature of the upcoming consultation on the amateur licence review. 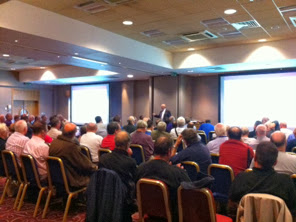 Far from being faceless Government officials, which one might be tempted to imagine. Paul and Ash came across well, seeming very approachable and genuinely willing to listen.

After this, I was looking forward to Pete, 2E0SQL’s ‘Another slice of Pi’ presentation. At yesterday’s presentation, Eben Upton himself, from the Raspberry Pi Foundation was in the audience. No pressure, then! but Pete said they had a great and very fruitful conversation in the bar afterwards, with Eben offering some interesting insights to forthcoming developments. 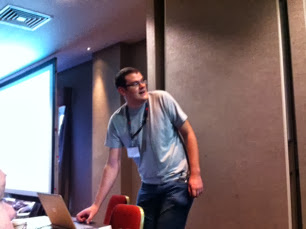 Pete’s presentation was excellent and I came away with some more things to try with my Pi – particularly with some ideas for new software to try.

I didn’t fancy the Roast Pork lunch so much, so drank coffee and chatted with friends, some not seen face to face in 10 years or so. Undercurrents of ‘politics’ are never far away and I noticed a couple of discussions going on which I was glad I didn’t need to be involved in!

After lunch it was time for the presentation which had been the trigger for me to attend the convention, ‘DXing with weak signals’ by Joe K1JT. You may remember I have referred to Joe as one of my ‘Ham Radio Heroes’. I really wanted to hear him speak and if possible to meet him and have the chance to say ‘thank you’. 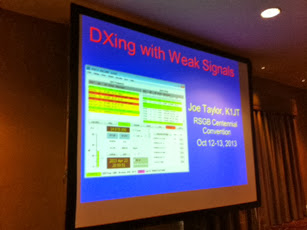 Joe was an excellent and engaging speaker. Although I know his software pretty well, there were some very interesting points discussed and things I learned.

I was particularly enthused about the idea of getting on 144MHz EME. Joe talked about having worked over 800 stations with his station which uses a pair of 10el X-Y yagis. This was inspiring!

It was interesting to get a sense of how the various JT modes stack up with SSB, CW and so on – just how weak can a signal be to get some intelligence out of it. 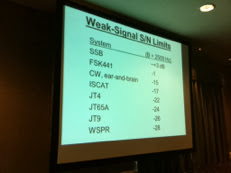 I would have quite happily listened to Joe for hours, but sadly the talk was soon over, but it was a privilege to hear him speak. 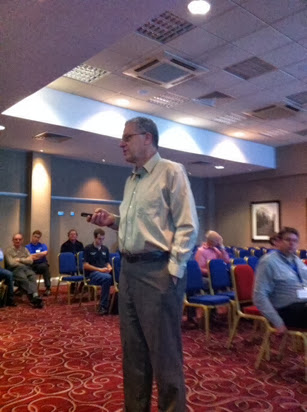 A really enjoyable and inspiring day out!