What’s interesting on FT8 is that you get two separate decodes – one of the main signal and one of the reflected signal. Look at this screenshot and the signals from G0GGG 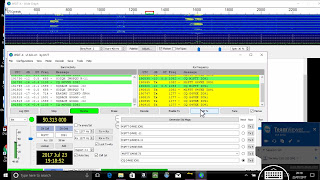 I have had quite a lot of success working UK stations on JT65A via aircraft scatter, although some overs have so much doppler that the decoder simply can’t cope. Maybe FT8 will offer some more possibilities.
Tim Kirby, G4VXE, is a regular contributor to AmateurRadio.com and writes from Oxfordshire, England. Contact him at [email protected].