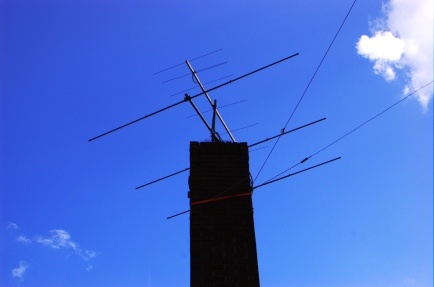 As I mentioned in the previous post, I’ve made some strides toward getting on 6 meters over the weekend.  I assembled the 3-element Yagi last weekend.  It was leaning against a post in our back yard pointing skyward for a few days.  I told Sarah that I was thinking of adding 18,431 more of these antennas so I could compete with the 50-MHz radar at Jicamarca.  She was not amused.  I hadn’t even mentioned anything about megawatts.  Yes, Virginia, the mast in the photo is not square.  The top portion of the mast is a little skewed in the rotor and it’s attached with rusty U-bolts that I’ve never loosened.  I’m still turning the antenna with the TR-2, even though I have a T2X out here now.  I will do that swap eventually.  But, for right now, the TR-2 is doing fine. 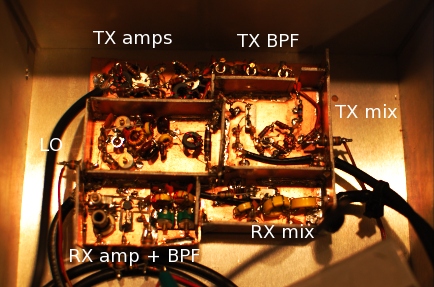 In order to start moving the transverter toward its new home in a beautiful rack-mount enclosure that previously housed a 900-MHz digital repeater (not included when I obtained the box, unfortunately), I had to “re-arrange its internal organs”, as a menacing extraterrestrial used to say in Space Quest.  Sarah wonders why I schlep all of this crap from place to place with us.  I’ve had that rack-mount box longer than we’ve been married!  It was just waiting for a chance to serve in my shack.  Anyhow.  You can see the layout above.  Sarah says it looks like a doll house.  Pretty sweet house, if I say so myself. 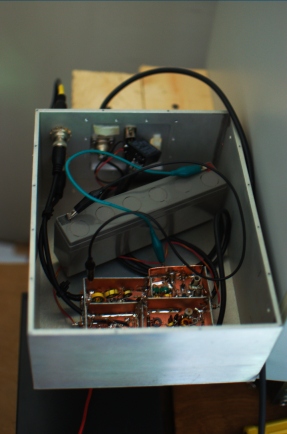 Here’s another view of the partially-integrated box.  I’m running it off a battery because I don’t have the power supply subsystem installed in the box, yet.  It’s really just a PA and some control circuitry away from operational.  Although, I would like to align the TX side with a spectrum analyzer at some point.

I heard quite a few signals in the ARRL contest over the weekend.  W5ZN comes to mind, as well as a couple of locals like N4QQ, who lives just a stone’s throw away on the other side of the Beltway (aka the wrong side of the tracks).  I suspect that the locals would move the S-meter a little more (like past S9) if I put an IF amplifier in after the RX mixer.  But, I’m not really keen to do that unless I have to.

Schematics will come once I’m finished.  But, nothing about this so far has been rocket science (or brain surgery, as the rocket scientists say).  I’ve just been following the Handbook.