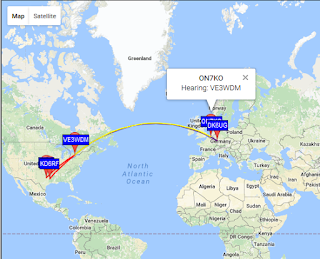 The other evening I was having a cup of tea and checking out my new QST that just arrived and found myself very interested in a piece written by Steve Ford in his column Eclectic Technology. The title caught my eye "When a signal is barely a WSPR" Steve looked at how the Raspberry Pi could be used for WSPR transmissions. Seeing I have the Raspberry Pi3 this sparked my interest. It was pointed out that all you need to turn your Pi into a WSPR transmitter is a board from TAPR called QRPi.  The board is offered at a very reasonable price of 29.00 U.S and it's set for 20m at 100mW. Before I got to excited about this little project  I wanted to see if using 100mW's would net me any results. I have seen other hams in the past net great results with far less than 100mW's and WSPR is known for it's great decode at very low power........BUT.......I do have a challenging setup here. On Friday late afternoon I gave WSPR a go on 20m at 100mW and was I impressed with the results. I was received by DK6UG for a distance of 39383 miles per watt and also ON7KO for a distance of 37285 miles per watt. I was amazed that my setup was able to produce those results! Now another question I wanted to consider is at 100mW how much of that actual power makes it to my antenna? To do this I referred to a coax calculator I punched in the type of coax (RG8X) the SWR (1.4:1) the length (30 feet)  the frequency (14) and finally the power (100mW) The calculated amount I was informed was 92mW of raw power! So this bumped my miles per watt to 42810 for DK6UG and 4053 for ON7KO! It's not timo look more into the TAPR project!!
Mike Weir, VE9KK, is a regular contributor to AmateurRadio.com and writes from New Brunswick, Canada. Contact him at [email protected].