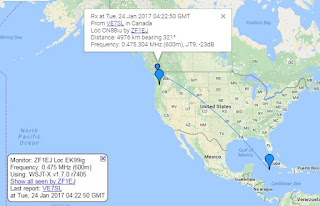 This was Eden's first 630m JT9 QSO as well as the first ever 630m QSO between Canada and the Cayman Islands. The contact was completed shortly between 8:15 and 8:30 PM local time. The contact attempt was initiated via the ON4KST 2200m / 630m chat page after I had decoded Eden's signal shortly before 7 PM local time ... the first time I have seen his signal so early in the evening.

Eden was using a VK4YB Monitor Sensors Transverter and a newly deployed transmitting antenna described below in the KB5NJD Daily 630m Report:

"This is how the antenna is setup:- It is a tophat vertical, the tophat is 65’ 6” long and about 80’ above ground, the vertical is 74’ 6”, There are 4 radials 10’ above ground, each 128’ 6” long. The antenna is made of #10, stranded insulated wire. The tophat is strung between two towers and is side on about 45 deg. The tuner was built by Ron and Ward a few month ago and shipped down to me. Just found the time to set it up recently. The SWR is 1.1-1 and I am using a Monitor Sensors Transverter built by Roger, VK4YB. Output to antenna 22 watts."

The only change to the above report was Eden's e-mail follow-up indicating that his power output during our QSO was 32 watts ... conditions must have been even better than I thought.

There is no question that his antenna works very well as his signal was decoded on every transmission following my first reception of his JT9 signal. Conditions appeared to be good enough that we could have continued the contact for some time as there was little fading during the time of our QSO. Later in the evening, signals at his end reached well into CW levels for considerable time while just one WSPR transmission from Eden was received at CW levels.

With an even newer JT-9A mode now promising a 2db improvement, making contacts should be even easier. Once the USA gets access to 630m, it is clear that Eden will be a popular target for most North American stations!