Young operators in All Asian contest 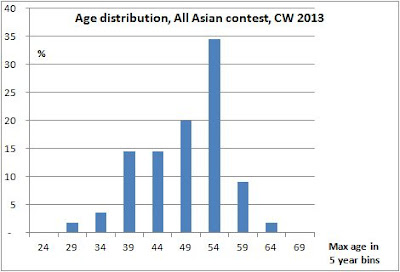 The All Asian DX Contest is one of the more fun ones to participate in. One thing is the DX aspect of it, but I like it also because of the exchange of the age of the operators. In other contests one exchanges boring stuff like serial number 1, 2, 3, … ; the CQ or IARU zone (14 and 18 for me); or the power output. But exchanging the age of the operators gives a little glimpse of the person behind the radio on the other side.

It also makes it possible to make a graph of the distribution of age. I had 62 contacts this weekend, of which 55 were unique. They were mainly in Asiatic Russia and Japan. The average age of the operators was 51.6 years – 7 years younger than me – and the graph shows the distribution. The bar for e.g. 54 is the percentage, 20 in this case, of operators in the bracket 50-54 years and so on.

The graph actually makes me quite optimistic concerning the future of ham radio. There are many young contest operators out there, at least in Asia. This resonates well with what others are saying also. Never before has there been so large activity on the bands as during contests these days.

2 Responses to “Young operators in All Asian contest”