Yet another fake Diamond antenna

I ordered a Nagoya NA-771 antenna on eBay. I was impressed with the shorter NA-701 and wanted something with a bit more gain that was not poke-you-in-the-eye long. The NA-771 had mostly good reviews on eHam.

I ordered from an eBay seller that shipped from the UK. The price was £4.99. When it arrived, I found the packaging and the antenna itself claimed to be a Diamond RH-771 not a Nagoya NA-771. 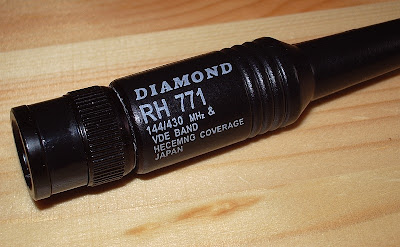 But this is clearly another fake Diamond. The lettering is white whereas the real Diamond product is lettered in blue. The lettering also contains nonsense. It claims “144/430 MHz & VDE BAND HECEMNG COVERAGE JAPAN.” Eh??? Perhaps it was supposed to say wide band general coverage? And the antenna is only 36cm long whereas the real RH-771 (and the NA-771) are supposed to be 39-40cm long.

None of this would matter if the antenna was any use, but in fact its resonant frequency is just below 120MHz. At 145MHz the SWR is more than 4 to 1 and it radiates a poorer signal than the shorter Nagoya NA-701 antenna.

Anyone want an air band antenna? Yours for a fiver. And can anyone recommend a seller that has the genuine Nagoya NA-771?

8 Responses to “Yet another fake Diamond antenna”