8 August 2017 | by Steve VE7SL  |  Share |  Tweet |  Leave a Comment (6)
When the HF maritime CW bands were shut down in the late 90's, one of my favorite pastimes also ended ... listening for and logging the various coastal stations as well as listening for the ships themselves.

Until very recently, I had believed that there were no longer any HF maritime operations left, other than various Coast Guard weather announcements and an emergency watch on certain USB frequencies.

Over the past week I have discovered that HF maritime activity is still alive and well, through the worldwide Digital Selective Calling (DSC) system, which has been around in one form or another since the early 90's as part of the Global Maritime Distress and Safety System (GMDSS) ... I guess I was just asleep at the switch, having not been aware of the HF DSC activity!

Although it's not CW, there's still ample opportunity to hear and follow global shipping traffic as vessels of all types contact coastal land stations or call each other. One requirement that keeps the DSC frequencies busy is the requirement for vessels to test their systems at least once per week, providing many opportunities to log various coastal stations or add a new ship to your logbook. Ships can be heard calling coastals for a routine signal test, setting up an SSB phone QSO on a specified frequency or just calling another ship for a test or a phone sked. As well, DSC can be used to send a distress message alert in times of emergency.

Messages are sent in an error-correcting FSK mode, similar to the Navtex system, using the same speed and shift of 100 baud /170Hz. There are a few programs that can be used to decode the DSC messages but one of the best and most popular is the freely available "YADD", by Dirk Claessens .

YADD stands for "Yet Another DSC Decoder" and is an offshoot of Dirk's equally popular and effective "YAND", a free Navtex decoder.

YADD and several other software decoders can be downloaded from the NDB List Info site ... the best source of hands-on information for topics involving NDBs, Navtex, DGPS, DSC DXing and more. 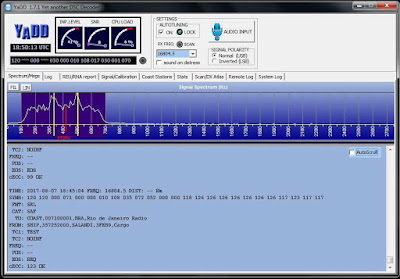 The spectrum display at the top of YADD's screen shows the audio passband coming from the receiver. With the receiver in the CW mode, DSC signals will appear on the frequency that your receiver's BFO offset frequency is set for. I prefer an offset of 400Hz so the spectrum display shows the signal at 400Hz, with the tuning cursor centered on a signal. A narrow CW filter should also be selected but no narrower than 170Hz.

Each vessel using the system, as well as the coastal land stations, have a unique 9-digit MMSI number (Maritime Mobile Service Identity). Once the software detects the MMSI numbers being used, it can then display the vessel's name (or the coastal's location and distance) so you know who you are listening to ... it's all very slick!

After initially running my receiver for a few minutes on the 12MHz DSC channel, I decided to look up the location of the first two ships I had heard, using one of the Internet's marine traffic sites.

I was surprised to find that my first catch was a large tanker under way in Kola Bay, having just departed Murmansk, in the Russian Arctic. Vessel number two was also under way along the east coast of South Korea.

A quick position check shows the SALANDI at anchor awaiting docking in Santos, southwest of Rio. 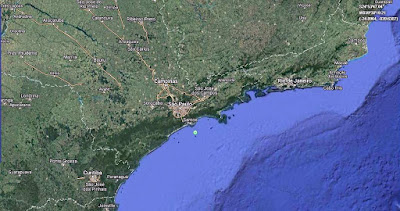 I soon discovered an active group of DSC DXers in Yahoo Group's DSC List, which I quickly joined and started asking a lot of questions. The 'Files' section also contains the latest list of ship MMSI numbers so that your YADD look-up text file can be kept up-to-date.

One of the group members, GM4SLV, has set up a wonderful website called YaDDNet devoted to collecting and posting listener's decoded loggings in realtime. One of YADD's features is the ability to automatically upload decoded signals, similar to PSK Reporter. It's an easy 30-second job to configure YADD to upload your spots to the net. His site also contains the latest MMSI look-up file used by YADD which is updated in real time from the latest log postings ... presently at 34,566 vessels!

Clicking on any of the uploaded ship names displayed in the real time YaDDNet log, automatically takes you to an online vessel-tracking site which usually has a picture of the ship along with all of its information, including its present position.

If you set up YADD to do some listening, I'd strongly urge you to also set it up so that your decoded spots are uploaded to the YaDDNet page in real time. Configuring this capability is very simple. Your latest logs will also keep the MMSI database up-to-date for all YADD users.

If, like me, you have missed the maritime CW activity on HF, you may find monitoring DSC traffic of interest ... both ships and coastals. I may even try QSLing some of the coastals again, many of which will still issue a traditional card QSL, upholding a long standing shortwave radio tradition ... but grab them while you can!