Welcome to 2016! Lots of big projects are going on here at the radio ranch. My youngest is working on an arduino powered weather station that will be located at the FFA field plot along US51 north of Heyworth. We’re going to get the data from the site using the AREDN ham radio mesh software. It’s a real cool project, and my daughter is doing a great job with the programming.

I finally got all of my coax run into the shack in a decent fashion, and I’ve got coax switches in place to be able to toggle between the two hf rigs and the two hf antennas. My next antenna will either be an hf beam, or I’m putting up a sky loop. Or maybe another windom positioned north to south. Who knows! 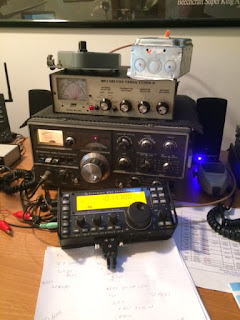 I played with the Yaesu Wires-X software and an HRI-200 box this past week. I hooked it to a Motorola CDM-1550 mobile radio. I really like these Motorola radios – great receive, easy to interface, and just all around bullet-proof. These are the same radios I’ve used for two D-STAR repeaters…hard to beat. Anyway, I’ve got the Wires-X setup on a UHF simplex channel linked into the Central Illinois room. Wires achieves the same as a D-STAR reflector, just done a different way. I’m running Wires in analog mode, and so my analog audio is digitized at my computer and sent on to the server running the room. From there it goes to whoever else is joined into the room. If someone is running Wires in digital mode, the audio comes out digital. If you’re running analog, it comes out analog. I’m not sure if I’m going to hook this into our Heyworth analog machine, or if I’m just going to keep it as a simple simplex node (a hotspot in D-STAR speak). 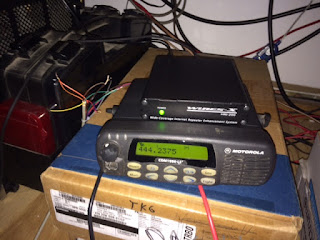 We’ve got a DR-1X repeater coming to Heyworth to replace the Kenwood TKR-820 the club has up on the elevator. The big benefit for us will be to replace the old Kenwood that sometimes has problems in warm weather, along with getting rid of a crazy long squelch crash. The new repeater arrives on Tuesday, and I’ll let it burn in for a few weeks (or months depending on the weather) before it goes up on top of the elevator.

That’s it for now…have a great year everyone!

Michael Brown, KG9DW, is a regular contributor to AmateurRadio.com and writes from Illinois, USA. Contact him at [email protected].