Today, Joyce KØJJW and I activated Kaufman Ridge North (W0C/SP-085) for Summits On The Air (SOTA). We’ve been on the summit before, including the first ever SOTA activation back in September of 2012. This summit is close to our cabin, so it made for a convenient hike. The mountain is not that difficult of a climb but we encountered quite a bit of snow in March, up to three feet in places, which we tromped across with snowshoes.

My blog posting about the next mountain to the south, Kaufman Ridge HP (W0C/SP-081), outlines a good way to access both summits during the summer. However, a seasonal gate closure (December to April) means we needed to find a different route. We approached the mountain from the north, parking our vehicle on Castle Court (a short side road off of Kaufman Road). We quickly crossed what appears to be private property (empty lot, no signs) to get to the US Forest Service boundary. Once we hopped the fence we were on public lands. We intentionally routed to the east to avoid some houses.

I don’t claim that this route is optimal. We had to break a lot of trail, pushing through the snow. We found a section of trail that had recent snowshoe traffic on it but it wasn’t of much use to us heading to the summit. We followed numerous game trails which appeared and disappeared on the side of the mountain. Mostly, we busted through the snow on our own. Surprisingly, the last quarter mile to the summit had little snow, so we removed our snowshoes at that point and just hiked in boots. 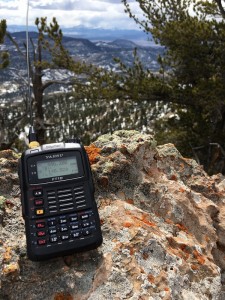 My Yaesu FT-1DR has become my favorite rig for SOTA activations. It covers both 2m and 70cm with dual-receiver capability. it has a built-in GPS receiver and APRS capability that facilitates easy APRS tracking. Joyce and I have a pair of these which we’ve been using to track each other’s positions on the few occasions we get separated on the trail.

After we made the summit, I made a few contacts on 146.52 MHz. Thanks to Jim KDØMRC, Dave KØHTX, Carl K5UK and Candy KEØDMT for giving me my four required SOTA contacts.

The weather turned out to be better than predicted…partly cloudy and temps around 50 degrees F. On the way back down, we retraced our ascent path so we had more of a snowshoe trail to follow. I have to admit that this trip was a good lesson in how off-trail snowshoeing can really be a challenge. This was many times more difficult than a summer trail hike of equal length and elevation gain. Trip stats: 2.6 total miles, 1300 vertical feet.

At least, that’s my story and I’m sticking to it.