Where are Those New Hams Coming From?

The Tri-Lakes Monument Radio Association just completed another successful Technician license class resulting in 21 new Technicians plus one person that passed both the Technician and General exams. We survey the class a week or two later to get their feedback and capture some demographic information. In recent years, our Technician class has consistently filled to capacity, causing us to ask the question “Where are those new hams coming from?”

The key relevant question on the survey is: 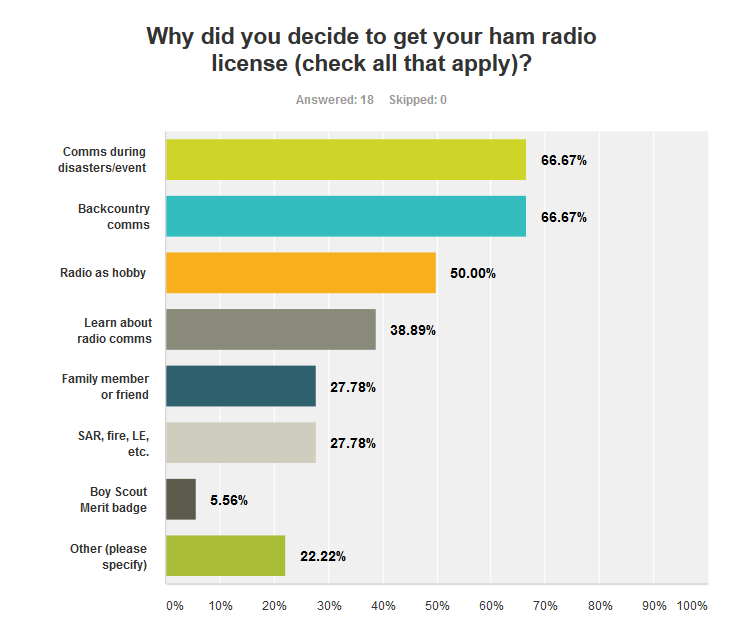 I’ve abbreviated the response choices so they read better on the graph. For example, “Comms during disasters/event” actually says “For communications during disasters or other major events” on the survey. These 18 responses represent over half of the students so they are representative of the class. However, it is a small sample size overall, representing just one class at one time at one location in the US. I will add that the surveys from our other classes are similar.

The two highest responses, both with 67%, are Comms During Disasters/Event and Backcountry Comms. It was no surprise that communications during a disaster would be a prime motivation for getting a ham radio license. Per FCC Part 97, this is one of the stated purposes of the Amateur Radio Service.  Here in Colorado, many people have had the recent experience of wildfires disrupting communications causing them to look for alternatives. In general, the prepper movement is causing people to think in terms of disaster preparedness. Communications in the backcountry includes hikers, climbers, fishermen, dirt bike riders, four-wheel drive enthusiasts and anyone who spends time in the mountains. There are many locations in Colorado that don’t have cellphone coverage, so people are looking for alternative communications. This is likely a regional phenomenon…I don’t think you’d see “backcountry communications” on the short list of amateur radio interest is downtown Chicago.

Radio as a hobby gathers 50% of the responses, followed by 39% interested in learning about radio communications. This says that about half of the students are pursuing ham radio as a hobby. I wonder if this is different that the historical average from 20 years ago? I suspect it used to be higher but I don’t have any data to support that. This would likely be a leading indicator for how many of these new licensees get deeply involved in ham radio activities. I have seen students start out with a narrow focus on emergency preparedness but then discover there’s a lot more to ham radio that they choose to pursue.

What do you think about these results?

The post Where are Those New Hams Coming From? appeared first on The KØNR Radio Site.

7 Responses to “Where are Those New Hams Coming From?”