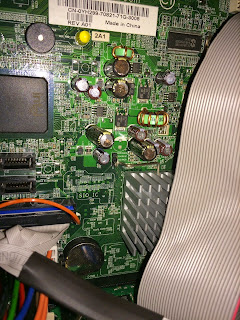 I’ve been helping out the guys in Springfield, IL get the W9DUA DSTAR gateway back up and running. We were successful reviving it after some Linux magic and Google-foo I performed a few weeks ago. We did notice that the server would reboot occasionally. Weird, but hey this is amateur radio not public safety.

After a few more hiccups it was time to investigate. Steve, K9CZ brought the server to me to take a closer look. After putting it on the bench and doing some more testing, I got to the point where I could scare it into a reboot on demand. Nothing in the logs, memory was properly seated, Dell diagnostics all passed, and reverting the last OS patch didn’t help.

Hmmm….looking around some more…I found these four capacitors on this Dell SC440 motherboard. Yep, they are toast. Something bad has happened in this server’s past. I yanked the hard drive and have it in a new machine now…after some more testing it should be back up and running by the weekend.

Michael Brown, KG9DW, is a regular contributor to AmateurRadio.com and writes from Illinois, USA. Contact him at [email protected].